Ocon vs Perez: The forgotten battle in Baku 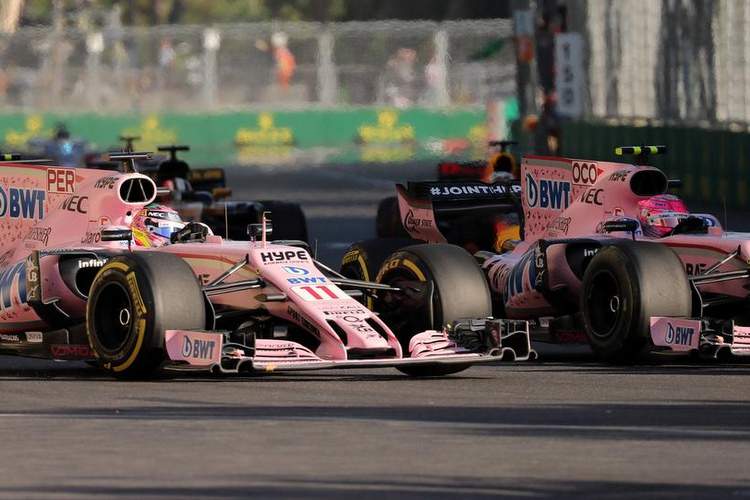 The Lewis Hamilton-Sebastian Vettel saga may have been the rivalry that grabbed the headlines in the wake of the frenetic Azerbaijan Grand Prix, but let’s not forget about the increasingly fierce feud between Esteban Ocon and Sergio Perez, which was every bit as contentious.

Having shared a difference of opinion two weeks earlier  in Montreal, their rivalry escalated even further in Baku with a costly coming-together during the race.

Alongside each other at the second safety-car restart, the pair collided when Ocon tried to make a move down the inside of the Turn 2 left-hander, forcing Perez to decide between backing off, hitting the wall or his teammate’s car, with the Mexican opting for the latter and sending both drivers to the pits.

Having been in P3 and P4 at the time of the accident, Force India were left to once again rue missed opportunities for a podium – if not the win – given what else transpired on the day.

As was the case in Canada, neither driver has been willing to concede culpability to the other in the aftermath, while Force India’s COO Otmar Szafnauer called the incident “50/50 [or] 55/45”, but also went on to brand it as “unacceptable”, leading him to conclude “they cannot fight each other.”

However, for Szafnauer, the solution to this ongoing tiff probably isn’t that simple, as given the relationship each driver shares with Force India, the objectives of team and driver don’t necessarily match.

While Force India’s objectives are relatively simple – defend their 2016 fourth-place in the constructor’s standings, the circumstances that placed both Ocon and Perez at the team give them strong cause to keep looking out for number one.

Firstly, both drivers are legitimate talents with realistic expectations of moving to a competitive team in the future, and allowing themselves to be out-raced by a teammate isn’t exactly ideal in such a case.

Following from this neither driver needs to toe the line like say, Kimi Raikkonen might have in the same situation, and unless Perez or Ocon start costing the team a Jolyon Palmer-level of points, the money will help mitigate any particularly serious repercussions.

Does this mean Szafnauer’s comments will go unheard, or his drivers would disobey a direct order?

Not exactly, but like a substitute teacher with their back turned, his control remains tenuous, at it only follows that Ocon and Perez will continue to test the limits, should the opportunity present itself.

Neither driver seems the type to back down from a fight, and with twelve races left in the 2017 season, it’s highly unlikely this beef is done just yet.

Big Question: How does Force India bring an end to Sergio and Esteban locking horns to their detriment?