Inside Line: Lewis must do his talking on track not on the radio 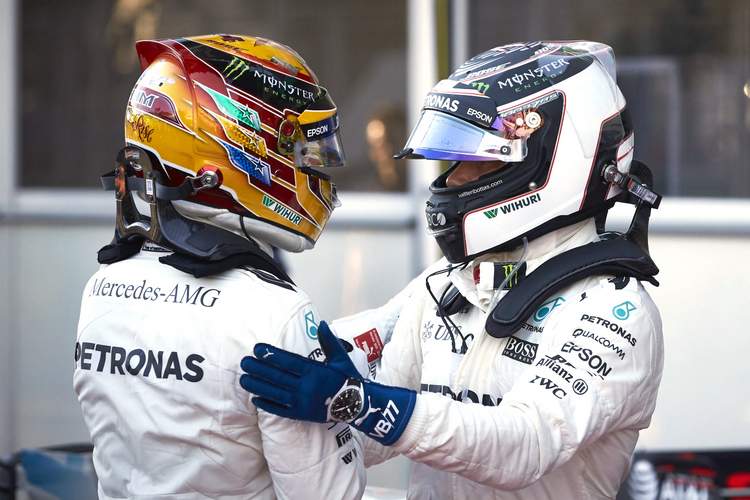 Lost amid all the drama in the wake of the Azerbaijan Grand Prix was the request over the radio to his Mercedes team by Lewis Hamilton to get Valtteri Bottas to back-up Sebastian Vettel in the late stages of the race.

After Vettel’s penalty and Hamilton’s pit stop to sort out a loose headrest, the Mercedes driver was on a charge to catch Vettel.

On lap 47 Hamilton radioed his crew on the pit wall: “Guys, if Valtteri can’t catch the man ahead, tell him to slow down a bit to cause a bad wake…”

It was a brazen request by Hamilton to his team in the heat of the moment, suggesting that Bottas should slow down and back Vettel into him. Not cool.

The call was wisely ignored by Mercedes. Although quite within their rights to do so, it would have been a travesty had they ordered Bottas to slow down deliberately.

Bottas was on a charge from last place thanks to a first lap puncture as a result of yet another collision with his nemesis Kimi Raikkonen.

It was a gutsy drive – probably his best with the team so far – and should further entrench the Finn in the Mercedes team, second place his reward and denying him that would have tarnished the image of the team.

The fact that Hamilton even requested such an option indicates the true status of the two drivers within the Silver Arrows hierarchy. Clearly the triple world champion considers himself the number one.

Indeed his ‘affection’ towards Bottas, in contrast to the open hostility he had with former teammate Nico Rosberg, is apparent only because the Finn, at this stage, is not challenging the Briton’s number one stature within the World Champion team.

Mercedes need to allow their drivers to race, not only for the benefit of the show and obvious sporting reasons, but also because this is what Formula 1 is all about: racing.

If later in the season, in a scenario where the maths dictate that Bottas cannot win the title, then the option of such team orders is acceptable. And vice-versa should Hamilton’s title chances falter.

But right now with so much to play for. and 12 races still to go in the championship, Hamilton’s request was audacious and unreasonable.

Mercedes management have a tricky situation to manage, for sure he improves with every race weekend Bottas is not yet regularly matching Hamilton’s blistering pace. The Briton has raised his game in qualifying and, let’s face it, his race pace in Baku was impressive.

Erase that headrest with a mind of its own and he would have cruised to victory.

Thus when Hamilton says he will do his talking on track, he should stick to that war cry. Stooping low to make demands on his team to slow down his teammate is not the stuff of true champions.

He said after the race, “I want to do the talking on the track. I want to win this championship the right way.”

Bottas is in a precarious position, as team chief Toto Wolff appears to be in no rush to extend his contract. In my book this is inexplicable as the Finn has proved to be a good addition to the team. Baku was only his eighth race in a team that has been ‘owned’ by Hamilton for some time.

Let’s face it going up against Hamilton is no easy task for any driver (ask Fernando Alonso and Nico Rosberg), but Bottas has performed well and deserves an extension to his contract. He will continue to grow as he is made to feel more at home within the team.

Had the team succumbed to Hamilton’s plea and ordered there second driver to hamper Vettel, Bottas would have to oblige. Therefore a very good call from Wolff and the crew to ignore the request.

On the other hand, Hamilton does not need help on track from his teammates, he never has. He is quite capable of challenging for the title on his own.

This was an obvious chink in his armour that could be exploited when Ferrari regroup and calm down after the Baku hysterics.

Jacques Villeneuve, never one to mince his words, made light of Sebastian Vettel’s road rage swerve at Hamilton during the safety car period and made it clear that Hamilton’s call for assistance was out of line.

The 1997 Formula 1 World Champion said after the controversy packed race in Baku, “What’s the big issue? It’s great TV. It’s good to see that they’re on it. Much nicer than Lewis asking Bottas to slow Vettel down. That was embarrassing.”

Big Question: Was Lewis out-of-line calling for help from Valtteri during the race in Baku?