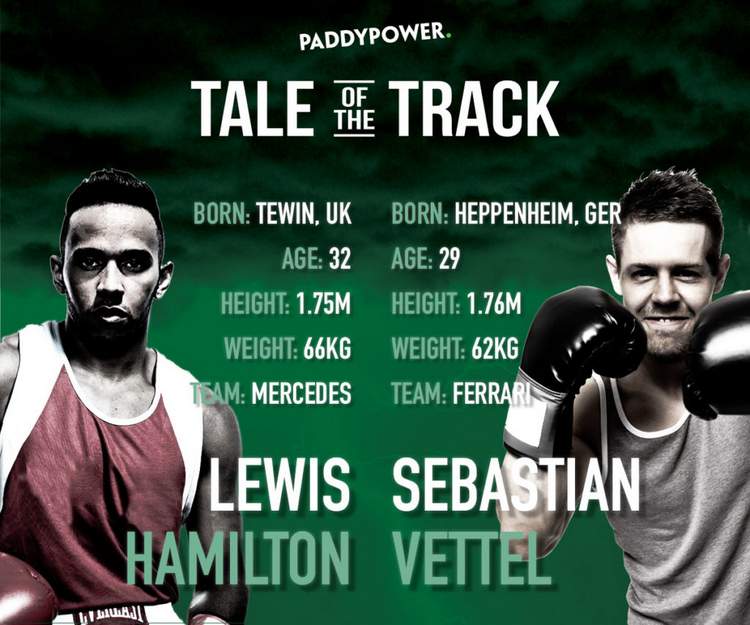 “If he wants to prove he is a man, we should do it out of the car, face-to-face”, said a ballsy Lewis Hamilton, after his on-track handbags with F1 title rival Sebastian Vettel after and incident and controversy packed Azerbaijan Grand Prix.

“I would pay to see that!” said Paddy Power when he finally got in to the office on Monday after the race in Baku and so two hours later, we’ve got the boss revved up to sign off and we’ve put our money where our mouth is – a £1-million (€1,13-million) boxing bout between the pair, winner takes all – for charity.

After all, the collision has got the world talking more than the upcoming Floyd Mayweather v Conor McGregor bout.

The fisticuffs between the two began when Vettel accused Hamilton of “brake-testing” him ahead of a safety car restart on lap 19 and proceeded to drive into the back of the Brit’s Mercedes.

It wasn’t finished there though, as the Ferrari man then angrily pulled his car next to Hamilton’s to remonstrate, before appearing to ram his opponent in a move that Mike Tyson would have been proud of.

Vettel was handed three penalty points and a 10-second penalty for dangerous driving, but still finished one place ahead of his championship challenger in fourth, as Hamilton required an extra pit stop.

Even though he’s used to being shunted (just ask Nicole Scherzinger) Hamilton branded the German a “disgrace” after the race. So, “what are the odds?” we hear you screaming.

Surprisingly, despite Hamilton recently taking up Thai boxing, our traders make Vettel an Anthony Joshua sized shot at 1/10 to have his hand raised in victory, should the fight take place.

Hamilton, who sits 14 points behind Vettel in the F1 Drivers Championship, is a 5/1 underdog for the potential match-up and whopping 14/1 to land a knockout blow on the Ferrari driver.

Asked about the row that has shaken F1, spokesman Paddy Power said: “So after Vettel smashed his car up, Lewis Hamilton is threatening to smash the German’s face up – it’s like road rage on steroids.

“Vettel is in the driving seat to win the fight, but I do think it’s really important to set some ground rules beforehand – boxing with them helmets would be no fun at all.”