Vettel and Hamilton open to peace talks after Baku rage 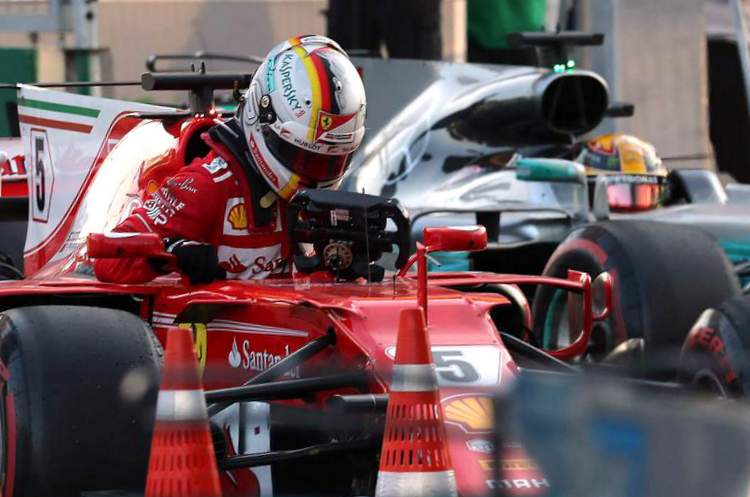 In the wake of his ‘road rage’ incident during the Azerbaijan Grand Prix, Sebastian Vettel will seek to sort out the affair with Lewis Hamilton who, despite reports to the contrary, has said he is open to a face-to-face discussion about the unsavoury incident between the two F1 world championship rivals.

During a tense and incident packed Azerbaijan Grand Prix, Vettel was penalised by FIA stewards with a ten seconds stop-and-go-penalty for swerving at the Mercedes driver in obvious anger, while they cleared Hamilton of any wrongdoing amid allegations by the Ferrari driver that Hamilton had brake tested him

In the aftermath of the fracas tempers appear to have cooled down with Vettel offering an olive branch to hamilton, “Now is not the right time to talk. I will do that just with him and clear it and move on. Maybe I’m not clever enough but I’m not complicated. I’m willing to sort it out with him, I don’t think there’s much to sort out.”

But despite the evidence Vettel believes he has done no wrong, “We’re here to race. We’re grown ups and people expect us to race and use our elbows, that’s what people want. Here and there you might get a bit close but people want real overtaking not just us driving past. I enjoyed the race but I don’t think it’s the right thing that I got a penalty and he didn’t.”

In contrast to Vettel’s agitated state after the race, Hamilton was subdued and apparently bewildered by the fact that the race he controlled was stolen from him because of a loose headrest.

The incident with Vettel obviously compounding the disappointment for the Briton, who said immediately after the race, “I think it’s a misjudgment from him to blame it on the car in front. Some people don’t like to own up to their own mistakes.”

“Driving alongside and deliberately driving into a driver and getting away scot‑free pretty much – he still came away with fourth – I think that’s a disgrace. I think he disgraced himself today, to be honest.”

The Mercedes driver did leave the door open for peace talks with his rival, “If he wants to prove that he’s a man, I think he should do it out of the car face to face.”

He added, “I’m just going to do my talking on the track, that’s most important for me. I’ve heard of what he’s said after the race. I’ve not come out of the race pointing the finger or said anything. It is what it is.”

“It happened, I don’t think it was right but the biggest thing for me was that I lost the race through the headrest issue. All I’m thinking of is: get my head together. I want to kill it for the next 12 races to go. I want to win the next 12 races,” added the triple F1 World Champion.

Hamilton trails Vettel in the championship standings by 14 points after eight rounds.

Big Question: Is the damage done or is peace between Seb and Lewis possible?