Ricciardo: We did everything we could 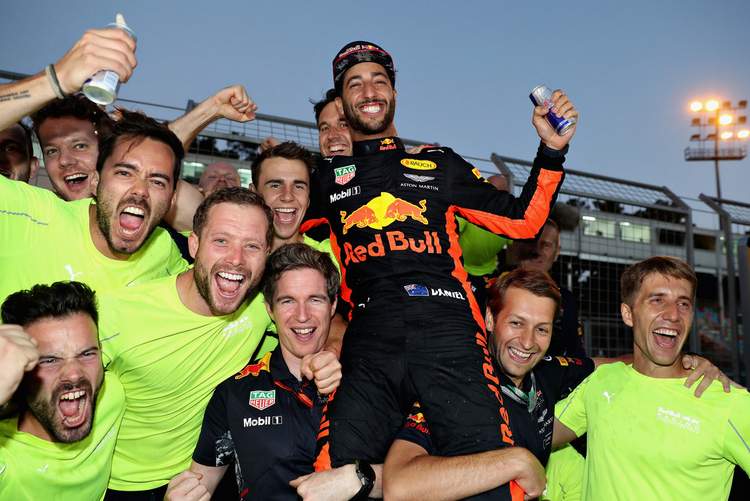 To cap another frustrating weekend for the team’s Dutch starlet Verstappen, the 19-year-old was forced to retire on lap 11 with major engine troubles forcing him into his fourth retirement in the last six races.

Yet Red Bull’s team were gradually snapped out of their misery by Ricciardo driving to his first victory since the Malaysian Grand Prix last season.

He summed up after the race, “After all the chaos and the red flag I felt that a podium was in reach but then once Lewis had to pit and Seb had the penalty I knew the win was possible.”

“I kind of said yesterday that after my qualifying mistake and starting in tenth place, today was going to be a race of no mistakes, capitalising on moments and opportunities and I felt like we did everything we could this afternoon.”

“I felt like this weekend was better for us overall and hopefully both of us can be on the podium together soon. What a day, it’s crazy and it’s slowly sinking in,” added Ricciardo.

Ricciardo, who has largely avoided the mechanical issues that have affected his teammate, was able to spare a thought for Verstappen.

“We’re still not perfect yet,” the Australian driver said. “We got one car to victory lane but we haven’t had two cars finishing strongly since China. That’s a target for the team to get both close if not on the podium soon.”

“Max’s misfortune will turn around. We’re at that point in the season where, give it another couple of races, we’ll get closer and closer.”

Red Bull principal Christian Horner said after the race, “We were totally depressed after the first quarter of the race. Max was going faster and faster and (then we lost) him with an engine failure. Daniel’s race then began to come alive. He was making great progress. He nailed it.”

“He was very consistent over those final 20 laps, found a great rhythm and was able to bring it home and close the race out. I think I aged about 10 years. There was every emotion you could imagine in that race.”

“We’re desperately disappointed to have lost Max but to get a win on this type of circuit is nothing we could have imagined. Max will be impatient but he’s had great pace and can see the car getting stronger.”

“Luck evens itself out. Daniel has had four podiums and a race win but I’m sure a big race is around the corner for Max.”

After retiring in Bahrain, Spain and Canada, Verstappen has not hidden his frustrations with Red Bull’s recent technical issues, complaining after qualifying that the unreliable engine was limiting his progress.