Alonso: We could have fought for the victory 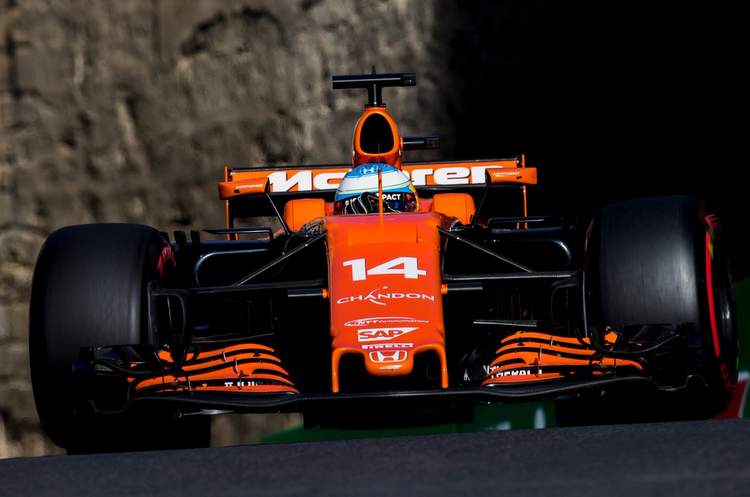 Finally, eight races into the season, McLaren have scored points with Fernando Alonso surviving the mayhem during the Azerbaijan Grand Prix to finish ninth and make the first notch in the beleaguered team’s scorecard.

The Spaniard. who avoided the chaos that ensued during an incident packed race, was up to fifth at one point and enthused over the radio that he could have won the race.

He repeated himself after the race, “I think we could have fought for a podium finish today – and perhaps even the victory. We were behind Daniel Ricciardo during the first Safety Car period; then Lewis had a problem with his headrest and was forced to pit; Sebastian had a penalty; Kimi (briefly) retired; the two Force India pair touched each other, so we automatically found ourselves in a decent position.”

But the Spaniard lamented, “We missed out on further opportunities because we weren’t quick enough in the race and couldn’t hold on to that position.”

But with gutless Honda power he was simply reeled in with ease and did well to soldier on to claim the two points that he did and added, “We got our first two points of the season today, so let’s just take that.”

“Starting 19th because of our penalties, on one of our least competitive circuits, yet still scoring our first championship points is unreal; a complete surprise.

“The race really came to us through the many retirements and a lot of action. I managed to stay away from the walls, just brushing them here and there,” he added.

A day earlier McLaren team chief Eric Boullier said, “I am racer, so I think this is the most painful weekend I have ever had.”

But Baku again reminded us that on occasions motor racing can be most unpredictable, Boullier said after the incident packed race, “The two world championship points we scored this evening are a validation of all we’ve worked towards in Baku this week.”

“Since practice started, I’ve said that we’d need to take advantage of every opportunity that came our way in the race, and we did just that,” explained the Frenchman.