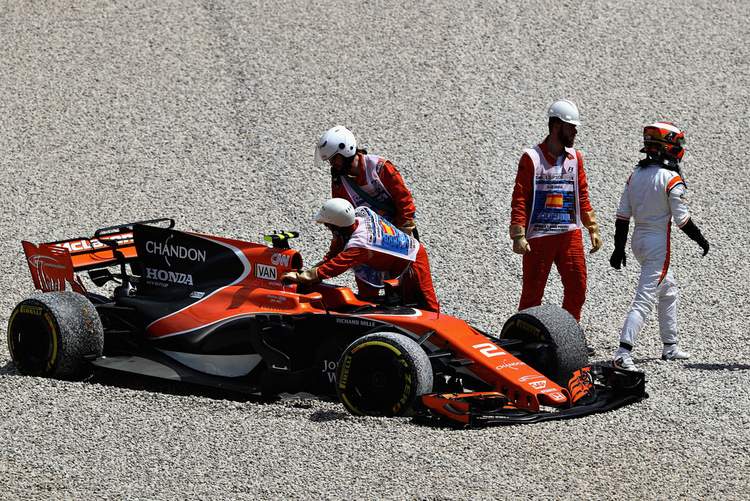 With two seasons plus seven races into the partnership, if the speculation is true, then McLaren and Honda are heading for divorce.

There is a quote from Albert Einstein defining insanity which is; “Doing the same thing over and over again and expecting different results.”

We keep hearing of new Honda updates coming, but the power unit is dreadfully underpowered and unreliable. Fernando Alonso, with fresh momentum from the Indy 500- albeit sadly ending with a Honda engine failure- was brought back to reality in Canada when his F1 Honda engine failed whilst heading for a points scoring position. To make matters worse, he has the ignominy of a grid penalty of starting from the back of the field for the next race in Baku for yet another engine change.

They say if something sounds too good to be true, then it usually it is! Such were the platitudes offered at the re-commencement of the McLaren-Honda partnership. A return to the classic days.

As so often happens, the hype has been very different from reality. Now entering their third year together, progress has been slow and painful, and there is an increasing bad flavour surrounding the relationship. Especially as McLaren are now the only the only team not to have scored a championship point, and are languishing in last place in the constructors championship.

Anyone who has been through the pain of divorce will know that once the honeymoon period is over relationships can change, frustrations can rise to a point where reluctantly you have to decide whether there is a real future together. Once you have reached the point of no return, then however painful, it is a matter of disentangling the partnership and coming to a financial settlement.

From the various comments made in the media one could assume that this point has been reached. Whilst Honda are a major financial contributor to McLaren, the lack of performance and most importantly lack of results, is now starting to have a negative impact on McLaren’s ability to attract commercial partners. Plus lack of points seriously effects their share of the constructors prize fund.

When we used to do presentations to sponsors, we used to use the line that a company’s performance is measured by quarterly results, whereas in Formula One you are measured after every race. So it is not an attractive proposition to be now seven races into the season and to have scored “zero points!”

There is also much speculation as to whether McLaren may switch back to using Mercedes customer engines. If I was to speculate, I wouldn’t be at all surprised that somewhere behind locked doors in the McLaren Technology Centre there is a McLaren chassis being adapted to fit a Mercedes power unit!

In a recent article, former McLaren driver and now TV commentator Martin Brundle ruled out the possibility of the split happening sooner to enable the team to get a more powerful engine in the car.

“You need to be designing that car now,” said Brundle. “I’ve heard talk of them running a different engine before end of season. No chance. The chassis, gearbox, radiators- you have to design the thing in the first place.”

That maybe so, because it is not just the engine, as the power unit also comprises two Energy Recovery Systems (ERS) and an Energy Store. However, I am certain that the McLaren of yesteryear would have been resourceful enough to be up for the challenge.

In 1993, the year after Honda’s first relationship ended with the team, McLaren was Ford powered. However behind closed doors, the test team worked on a secret project to marry a V12 Lamborghini engine to the MP4/8 chassis. The engine, although longer than the Ford was very neat and tidy, and most importantly very powerful. The car, in virginal white with no branding, was tested at the Pembrey circuit with Mika Hakkinen and Ayrton Senna. It was quick!

As McLaren test team member Ron Pellat explained: “The atmosphere was fantastic as both drivers loved the car. We knew if Ayrton liked the car, it had to be good!”.

The plan was that the test team were going to race it in the last three races with Mika, however less than two weeks before going to Portugal the project was cancelled.

Two years later, with significant pressure from title sponsor Marlboro, Nigel Mansell joined McLaren, together with new engine partner Mercedes. Although a World Champion and proven race winner, it wasn’t exactly a marriage made in heaven!

Firstly the car: The MP4/10 was probably the ugliest car ever built by McLaren. The car was designed more around the sizes of Mika and David Coulthard, who at one stage was posed to join the team from Williams one year before he actually did. Both drivers had slim hips, but Nigel’s hips were reputed to be some five inches wider.

Secondly it also wasn’t helped by Nigel’s preference for a very small steering wheel. According to Team Co-ordinator Jo Ramirez, Ayrton had his own view: “No wonder he’s always so erratic in the car- with that silly wheel he can’t possibly control the car smoothly!”

To put this into perspective, Nigel’s 24cm wheel could fit inside Ayrton’s 28cm wheel! Nigel relied on strength and to get the maximum leverage his arms were bent and needed lots of elbow room.

So the bottom line was that he didn’t fit and a wider chassis was required. But it wasn’t a matter of cutting the chassis in two and adding space. The whole chassis had to be re-designed to be in proportion, and then manufactured. Thanks to the CAD/CAM system, the new chassis was developed in record time of just over a month.

For the first two South American races, Mark Blundell deputised and Nigel made his debut with the wider chassis, which was nicknamed FB. This didn’t exactly mean ‘full bodied’, but was closer associated to body size and questionable parentage!

For those at McLaren at the time, you never got the impression that this would be a long term partnership. At the San Marino Grand Prix Nigel was outpaced by Mika and the at the Spanish Grand Prix, Mika was fighting for fourth whilst Nigel was 14th when he stopped the car saying that it was undriveable.

A clue as to his comments came when I interviewed him in front of the Paddock Club guests and he explained driving a lap of the Barcelona track. At the time it was somewhat embarrassing as he explained how he wanted to go one way, whilst the car wanted to go another. However it actually was one of the funniest interviews I had ever done, provided you could accept the humour of his making fun of the car.

After Barcelona the writing was on the wall and Nigel’s spell with McLaren ended in a quickie divorce! His place was again taken by Mark Blundell and the team struggled on for the rest of the year. At that stage this was possibly one of McLaren’s worse seasons, however in retrospect it could be seen as successful in the current McLaren Honda era.

In Canada this year there was the welcome return of the Formula One Raft Race, and congratulations are in order to Liberty for reviving the event and it is good to see fun coming back into F1.

This was reviving a tradition which goes back to the nineties, where the F1 teams would build a raft from whatever resources are available and then race it in the former Olympic lake behind the Paddock, with aim of completing the course before they sunk!

The race was won by McLaren, apparently without Honda, which might be a sign of the imminent divorce.

Fernando Alonso has publicly stated that McLaren had to win a race this year for him to stay. Well they have now! We await a stewards enquiry whether the raft race will count!

Inside Line Opinion by Peter Burns