Vettel: I wanted that podium 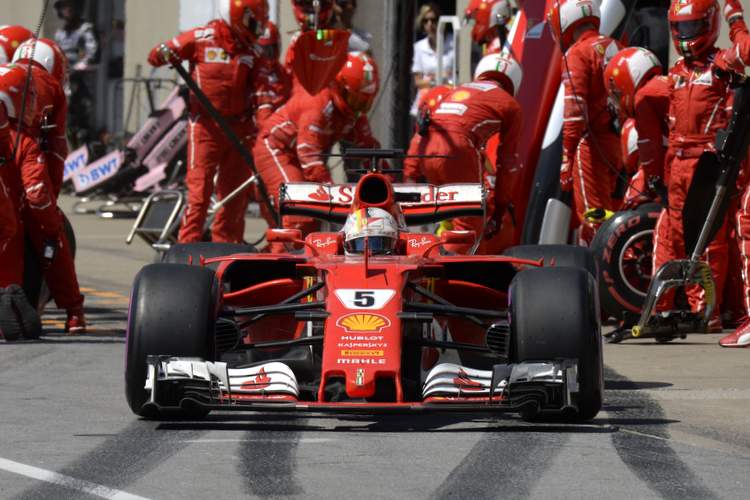 Sebastian Vettel fluffed his start at the Canadian Grand Prix, as a result incurred damage to his front wing which forced him to play catch up all afternoon and although he finished fourth, after a charge through the field from last place, he really wanted to be on the podium.

He said after the race in Montreal, “I wanted that podium. We didn’t get it, so I’ll take fourth.”

“With the damage in the beginning it was not ideal. It was bad that we didn’t spot it – I had a little bit of a feel [of damage] out of Turn 6 and then the safety car came, but I wasn’t sure because it was the first lap of the race and it was very windy, so I thought it might have been a gust and the first lap the tyres are not there.

“We should have spotted [the damage] and got a free pit stop. In the end we did it when everybody was back at pace and we had to catch up for a couple of laps.”

One of the highlights of the race was the duel between the Force India duo of Sergio Perez and Esteban Ocon, which Vettel managed to catapult by taking advantage of the pink cars battling one another.

The German recalled, “Coming back to that group at the end of the race was fun. With the two Force Indias it was quite difficult – they were very quick down the straights, and then when you have this phenomenon of cars behind each other all giving each other a tow and you’re at the back end, it’s not easy to create something.”

Vettel arrived in Canada enjoying a 25 points lead over title rival Lewis Hamilton, by the time they departed on Sunday night the gap was down to 12 points

“I think you judge what happens at the time. It’s clear that with the damage that we had unless there was trouble in front or we got extremely lucky with safety cars that it would be difficult,” he said.

“But in the end you look what you have in front of you. I was very busy for most of the race which I enjoyed, which was fun, it was good racing. There were some manoeuvres where I nearly wanted to close my eyes – but ultimately I think the team and the car deserved more. The pace was there.”

Mercedes bounced back from a mediocre Monaco Grand Prix weekend to post a dominant one-two in Montreal, but Vettel is not sure if the balance of power has shifted, “It’s a bit difficult to read – I think Mercedes were very strong in the race, but it’s also a different story when you can control the race, the pace, the tyres.”

“I was pushing flat out and when you chase other cars you lose quite a lot of grip, then you’re sliding, so a different race for us.”

The four times Formula 1 World Champion missed out on the podium for the first time this year, nevertheless he still heads the championship race but Ferrari now trail Mercedes in the constructors’ standings by eight points.

#F1 Big Question: Without the start mishap would Sebastian been able to challenge for victory in Canada?