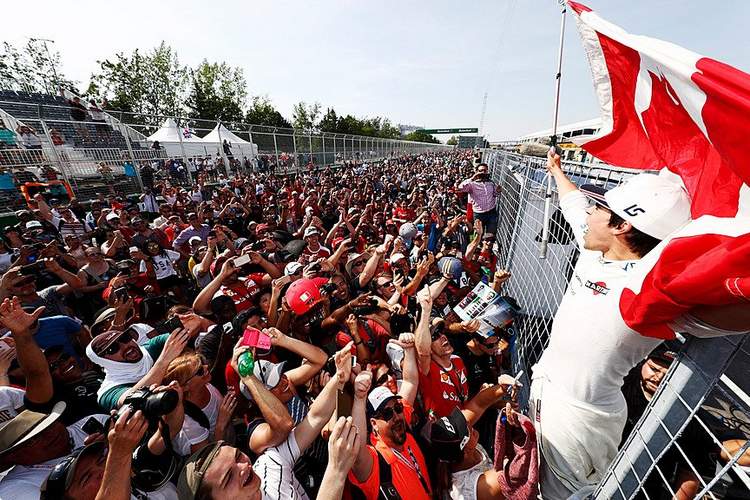 Lance Stroll hit back at his critics in style by taking his first Formula 1 points to the adulation of a flag-waving crowd of home fans at the Canadian Grand Prix.

Finishing ninth, the 18-year-old Williams driver became the first Canadian not named Villeneuve to score in a grand prix and also the second youngest points scoring F1 driver of all time.

It had not been shaping up before then as a very memorable home-coming for the youngster, who grew up in Montreal watching races at the Circuit Gilles Villeneuve and dreaming of one day being on the grid.

A string of uninspiring results in his first six races followed by a disappointing qualifying effort that had him starting 17th for Sunday’s race had dampened excitement around Stroll’s home debut.

But with veteran team mate Felipe Massa crashing out on the opening lap through no fault of his own, Stroll delivered the controlled and clinical drive that his team and fans had been waiting for.

He became the second youngest driver to score a point behind Red Bull’s Max Verstappen, who was 17 when he finished seventh in Malaysia for Toro Rosso in 2015.

“It feels so good in so many ways,” said Stroll. “Words can’t really describe it. It’s been a tricky beginning of the season. As I was saying at the beginning of the weekend, it’s just about having a clean Sunday and it will come to us. That’s exactly what happened today.”

Gilles’s son Jacques never won on the track but did win the drivers’ title in 1997.

“The most important thing for us today was Lance,” said Williams deputy principal Claire Williams. “He’s had a tough start to the year, hasn’t he? And to have a race like today, scored his first points, every rookie wants to do that and that’s what he did today.

“For it to happen in his home grand prix, it couldn’t be better. It’s just a dream come true for him,” she added

The son of one of Canada’s richest men, Stroll has had a tepid welcome to Formula One in some quarters with the focus on his father’s fortune.

But Sunday’s race-winner and triple world champion Lewis Hamilton gave Stroll a positive grade for his work so far and preached patience.

“I know he’s had such a difficult season,” said Hamilton, who gave the youngster a wave when Stroll was about to be lapped and let him past without fuss.

“He’s been dropped in the deep end, critics, all those different things you have when you’re 18-years-old and you’re experiencing your first time in Formula One and one of the most difficult seasons. I thought he looked like he was doing a good job.”