Ocon: A podium was possible for me 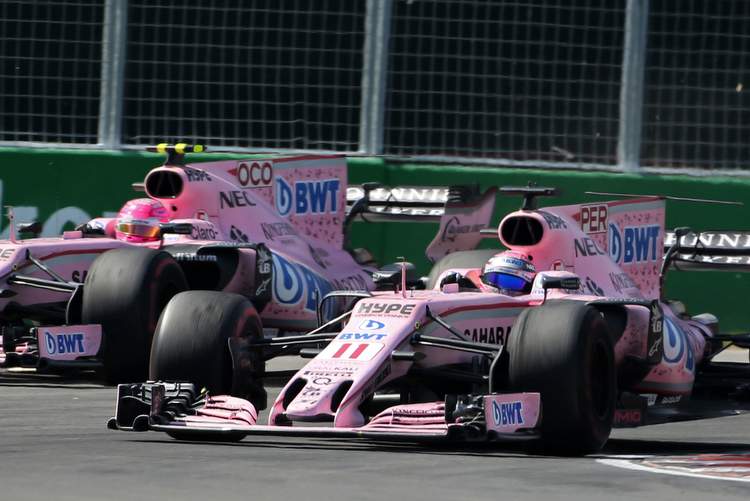 The pink cars of Sergio Perez and Esteban Ocon ran nose to tail for most of the final half of the Canadian Grand Prix, the one behind quicker on fresher tyres while the one in the front – fruitlessly chasing third placed Daniel Ricciardo – was asked to cede position but he refused.

It was one of the big stories in the aftermath of the race in Montreal: Perez arguing against clear orders from his pit wall, and as a result possibly costing his teammate a first podium.

Ocon bobbed and weaved as he clearly wanted a way past Perez, but when the hard charging Ferrari of Sebastian Vettel arrived on the scene Ocon ramped up his effort, but instead of getting by the other pink car the young Frenchman tripped up lost time and had to settle for fifth, while Vettel managed to get past both Force India’s to snatch fourth in the end.

Ocon, unflustered and smiling, told reporters afterwards, “It was a great race all in all. It’s just a shame I couldn’t have a chance to go and pass Ricciardo. I think I had the pace by far to do it, so a podium was possible for me.”

“But that’s how it is, that’s racing sometimes so we have to discuss what happened in the debriefing room,” he added.

Force India deputy team principal acknowledged, “Obviously we had given Checo the instruction that we thought Esteban might be a little bit quicker but at the end of the day we have a policy at this stage to say we let them race.”

“We let them race and sort it out themselves, and at the end of the day from a Force India point of view it was still a fantastic result. We come away with a significant amount of points,” added Fernley.

Force India COO Otmar Szafnauer also backed Perez, We talked about swapping them around, but Sergio wanted some time as Ricciardo was coming up to lapped traffic.”

“We agreed to that, and while we gave him that time, the Ferraris caught up. It takes two to three seconds to swap ’em, so we then didn’t have that time. Remember, Sergio had fresh tyres way back, and he couldn’t get by him. So would it be the same thing with Ocon… I’m not sure.

“We talked about it on the pitwall, we thought it was a good idea. But we let Sergio have a go, because he’s a great overtaker,” added Szafnauer.

Perez defended his actions, The best I can do is give plenty of points to them, as I have in the past. I think we got the most we could, and Esteban had many laps to overtake me, but he was not close at all.”

“I couldn’t get Ricciardo, so I don’t think he (Ocon) would have got him. Daniel was very strong on traction. When the team asked me to give the position to Esteban we were about to lap some cars ahead of us.”

“And I thought that Daniel might get traffic, and I only need two to three tenths to get the opportunity on him, and I could see he was struggling and I knew the Ferraris were coming,” added Perez.

Big Question: Was Sergio out of line by not allowing Esteban to get by and attack Daniel?