Hamilton: We delivered a great blow to Ferrari 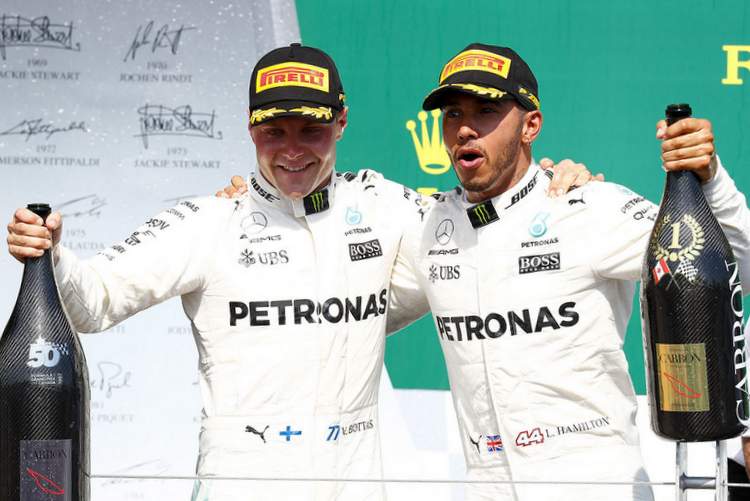 Mercedes arrived at the 50th edition of the Canadian Grand Prix on the back foot with Ferrari enjoying the momentum, but by late Sunday afternoon the Silver Arrows had restored the balance of power with a one-two victory which will have taken the wind out of the red sails.

After claiming his 65th career pole, a day earlier in qualifying at Circuit Gilles Villeneuve, Lewis Hamilton powered unchallenged to the top step of the Montreal podium – his sixth win at the venue – and his 56th Formula 1 career victory.

He said afterwards, “It has been an incredible weekend, I couldn’t be happier. Firstly for the team. To have come away from Monaco, really everyone scratching their heads and wanting to work and pull together, and we did.”

“In these five years [with Mercedes], I’ve not seen the team pull so well together and work towards the same cause, to understand the car and come here and deliver, what we delivered is a great blow to Ferrari.”

Heading to Round 7 of the championship, Mercedes trailed Ferrari in the constructors point standings but head to Round 8 back on top with an eight points, thanks to Hamilton’s victory and second place going to teammate Valtteri Bottas.

“[Mercedes] did such great work, analysing where we went wrong, all the points -this is where we went wrong and this is what we need to do to fix it — it was just amazing teamwork. We came here with the car back to where it should be, it doesn’t mean it’s going to be like that every time but I think we’ve learned a lot and I’m happy.”

“I think it should put us in a strong position moving forwards, in terms of which direction we need to keep developing the car. Although Monaco would’ve been a good one to win, I am happy it happened early in the season,” who reduced the gap to championship leader Sebastian Vettel from 25 points to 12.

Big Question: Is this the turning point for Mercedes or can Ferrari bounce back?