Alonso: The speed difference is dangerous 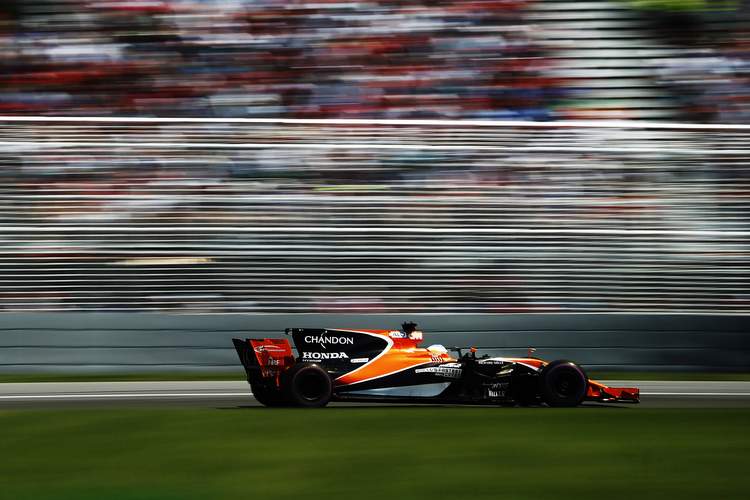 Speaking to reporters after the Canadian Grand Prix, Fernando Alonso warned that his Honda powered McLaren is so slow on the straights that it is a danger to drive in race conditions.

Alonso said after his DNF in Montreal, “The race itself was already hard enough given the lack of power. They were passing us in the middle of the straights and sometimes it was even dangerous with such a speed difference.”

A look at the speed trap figures show that Sebastian Vettel’s Ferrari reached a top speed of 344 km/h at Circuit Gilles Villeneuve, while Alonso’s top speed was a relatively meagre 317 km/h – 27 km/h down on the benchmark speed.

It was an all too familiar and sad story as his McLaren cruised to a halt in Turn 1 with another expired Honda power unit, with yet another technical issue which is sure to cost him penalty points for the next race in Baku.

The Spaniard explained, “It is not only that we lost a point [in this race] and we lost another race, we will start last in Baku because Jenson [Button] changed the power unit in Monaco and started last.”

“Here we lost a power unit and in Baku we will start last again. The situation is definitely not nice,” lamented the double F1 World Champion.

The highlight of his weekend was probably when he climbed into the grandstand, after alighting from his broken car, and threw his race gloves into the crowd.

He recalled, “I hoped to give the gloves to the guys there but the grandstand was too far away so I thought it will not get there if I throw the gloves.”

“So I thought I’d go up and throw the gloves, but once I was there I nearly couldn’t leave. We have so much support from the fans here every time we come to Canada so I felt I should give something back,” added Alonso who, along with his beleaguered team, has yet to score a point so far this season.