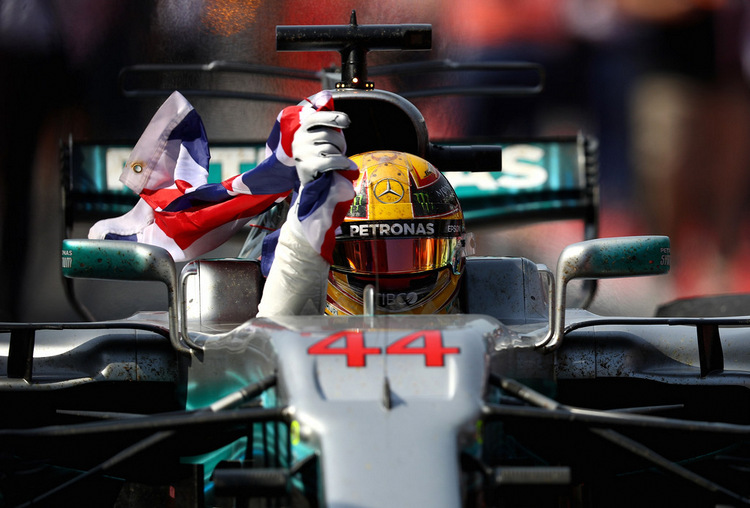 Mercedes driver Lewis Hamilton was in supreme form as he powered to victory at the 50th edition of the Canadian Grand Prix for the sixth time, and for the third year in a row, to cut Sebastian Vettel’s overall lead to 12 points and put Formula 1 champions back on the top step of the podium.

The Briton led from start to finish, after qualifying on pole at the Circuit Gilles Villeneuve for the sixth time, to chalk up his 56th career grand prix victory and third of the season and with it reducing the points gap to Vettel from 25 to 12 points.

A decade ago Hamilton scored his maiden win at the venue on the Ile Notre Dame, and only Michael Schumacher has won the race in Montreal more times.

Hamilton said afterwards, “Big thank you to this crowd. Every year the energy grows. I had my first pole here and my first win here. To repeat it is incredibly special. Valtteri did fantastically well to get the points for the team. I am over the moon.”

Hamilton’s team mate Valtteri Bottas sealed a Mercedes one-two, finishing 19.7 seconds behind the winner, with Daniel Ricciardo third for Red Bull for the third race in a row.

Bottas said, “Always good to be here. As a team we really needed this one-two to get the points. I am very, very proud to be a part of this team. I knew what I had to do in the end, this was good points for us.”

His teammate Max Verstappen jumped from fourth to second at the start and looked strong early on until his engine expired on lap 10.

Ricciardo summed up, “Today I only had fun when I saw the chequered flag. I couldn’t afford to make any mistakes. Concentration was getting tough. It’s great to be on the podium”

Ferrari’s Vettel, winner of three of the previous six races, finished fourth after a fumble at the start which cost him track position and then dropping further down the field when he had to pit to replace a front wing damaged when Verstappen cut into his path as they hurtled into Turn 1.

All credit to the German for throwing all he had in pursuit of the final step of the podium, but it was too much, too late.

Kimi Raikkonen, also had an awful start, but at one stage looked set to beat Vettel, but technical issues intervened late in the race and in the end the Ferrari veteran had to settle for seventh, with Renault’s Nico Hulkenberg in eighth.

The pink Force India cars of Sergio Perez and Esteban Ocon were fifth and sixth, but are likely to be embroiled in some heated post-race discussions as Perez defied his team’s order to allow a faster Ocon past late in the race. A podium was there for the Frenchman, but his Mexican teammate had other ideas.

Montreal born teenager Lance Stroll was ninth, a career-best finish for the 18-year-old rookie whose performance will have pacified his critics.

Clearly delighted the 18 year old said, “Today is special in so many ways. It’s been a tricky start to the season but we have known we were capable of doing it. It’s about having a clean weekend, a solid race and I had good communication and good balance.”

“The first points are done. It’s not going to get easier – we will still have challenges but I am just happy today,” added Stroll.

Teammate Felipe Massa was taken out of the race after a few corners when the out of control Toro Rosso of Carlos Sainz slammed into the rear of the Williams. Their race day ending there and then.

At the start Verstappen made the best getaway to shoot down the inside to claim P2 as leader Hamilton went into Turn 1. Slow-starting front-row starter Vettel was swamped, contact with Verstappen and perhaps Bottas too resulting in broken wing elements for the German. He would later pit on lap six for running repairs that dropped him to the rear of the field.

Vettel succeeded, however, in fending off a hard-charging Daniel Ricciardo who had passed Kimi Raikkonen when the lights went out.

In the midfield there were more incidents however. Sainz and Grosjean touched, with the result that Sainz was pitched into a spin. He sailed out backwards through Turn 3 and slammed into Massa as he did so. The Toro Rosso and Williams drivers were instantly ruled out, but Grosjean managed to continue after a wing repair and a set of supersoft tyres.

The incident brought out the safety car as the two cars were recovered and on the re-start Bottas attempted to pass Verstappen around the outside into Turn 1. The Dutchman was alive to the threat, however, and fended off the attack well.

Bottas wouldn’t have to wait too long to get past the Red Bull man, however.

On lap 11 Verstappen’s Red Bull suffered a sudden and total loss of power on the exit of Turn 2. He was forced to pull over and retire. Bottas inherited second place with Ricciardo third.

At the front, Hamilton was carving out a lead and by lap 20 he was six seconds clear of team-mate Bottas. Ricciardo, meanwhile, pitted on lap 19 and took on soft tyres. The Australian dropped to sixth and then began to work his way back up the order.

It was a similar story for Vettel. The German had fallen to P18 after his early pit stop and despite losing more front wing elements the German quickly worked his work through the pack to sit in P8 by lap 22.

By lap 28, Hamilton was 24.4 seconds ahead of Ocon. Both were still on their starting ultrasoft tyres, but both were lapping in the 1:16 seconds, matching the pace of Bottas on soft tyres. Ricciardo was now fourth, though the Red Bull driver was now 12.4 seconds behind Bottas and almost 13 seconds behind Ocon.

Hamilton and Ocon eventually pitted on lap 3X. Both took on supersofts and while Hamilton rejoined in the lead, Ocon dropped to sixth place, between the Ferrari’s of Raikkonen and Vettel. At the front, after one stop, Hamilton led Bottas by just over 10 seconds with Ricciardo third a further 13 seconds back and with Perez now in fourth place.

By lap 49 Ricciardo was beginning to come under sustained pressure from Perez. The Australian’s engineer Simon Rennie told him that if he could withstand the pressure for a spell then the Mexican’s times would begin to drop off as his supersoft tyres faded.

Behind them, Vettel pitted for a second time from P6, taking on ultrasoft tyres for a final push towards the flag, with his race engineer Ricardo Adami informing him that he should catch his rivals ahead in the closing stages.

Vettel duly began setting purple lap times, recording a fastest race lap of 1:15.431 on lap 51 and then taking another three tenths out of that time on the next tour.

Perez, meanwhile was having no luck in attacking Ricciardo and by lap 56 the Force India pit wall was imploring him to allow the quicker Ocon through to try to pass the Red Bull. Perez, though, was ill disposed to the tactic and resolutely refused to cede the position, insisting that he would have an opportunity to pass Ricciardo.

Behind them Raikkonen went wide at the final chicane and that allowed Vettel through to attack the Force Indias. He seized the chance and by lap 64 was just 0.4s behind Ocon.

As Ocon tried to exert more pressure on his team-mate, Vettel attacked. Ocon tried to resist but ended up going wide and then lost position to the German.

That put Vettel through to P5 and he quickly reeled in Perez, eventually passing the Mexican with two laps left.

The tussling had given Ricciardo breathing room and as the final laps began he was 3.9s ahead of Vettel. The Ferrari driver closed in rapidly but there wasn’t enough time and the Red Bull driver was able to hold third behind easy winner Hamilton and Bottas.

With Vettel fourth ahead of Perez and a disgruntled Ocon, seventh place went to Raikkonen and eighth to Hulkenberg, with Stroll ninth and Grosjean tenth.