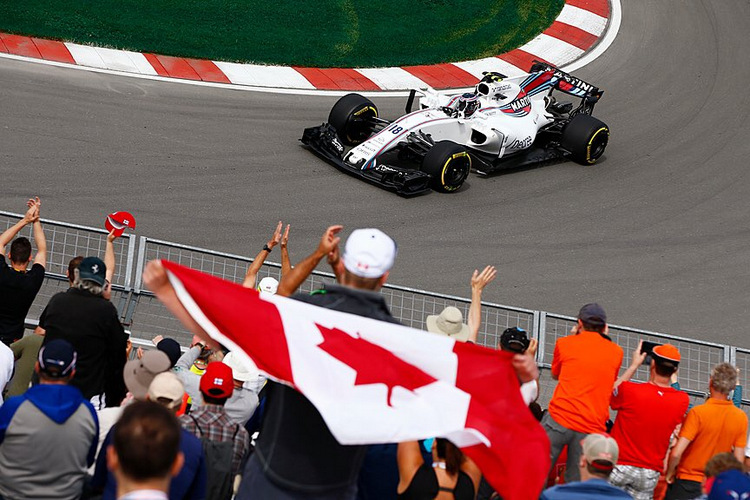 Growing up in Montreal as the son of a billionaire, Lance Stroll always had one of the best seats in the house for the Canadian Grand Prix.

The 18-year-old had an even better one on Friday as he realised a childhood dream by speeding around the Circuit Gilles Villeneuve in the cockpit of his Williams in opening practice for the race.

It was a warm homecoming for Canada’s first Formula One driver since former world champion Jacques Villeneuve left Sauber in 2006 and Stroll was welcomed to the track by waving flags and loud cheers.

“It’s a great track, I really like the rhythm and it’s just good to be home,” said Stroll. “It was a good day getting used to the track, but I have to treat it as just another race at the end of the day as everything stays the same.”

“On the out lap I looked at the fans and saw them waving and cheering and that is really cool,” he a added with a grin.

Stroll can expect even greater support during Sunday’s race as he tries to build some confidence and momentum in what has been a challenging Formula One debut season.

Without a point in six races, Stroll and the team have set a top 10 finish as the target at his home maiden grand prix. But if the first two practice sessions are any indication, Stroll faces another uphill battle.

While the young Canadian received positive words for his work on Friday, 13th and 17th fastest will not get the job done.

“He’s shown reasonable pace for this stage of the weekend and he hasn’t used the ultrasoft (tyre) yet,” said Williams chief technical officer Paddy Lowe.

“There’s still a lot of work to do overnight to keep finding extra performance, but we’re hopeful we can have a good day tomorrow and score some points on Sunday.”

A better performance will be expected from Stroll on a track where Williams cars have done well in the past, including back-to-back podiums last two years.

It has been a steep learning curve for Stroll and he has come under attack in some quarters for his modest results.

“But I don’t focus on that. I know who is important around me and those are the people I listen to. The rest of the noise you just have to block it out.”

Certainly Stroll has lofty standards to live up to this weekend. The Circuit is named after Quebec motor racing icon Gilles Villeneuve and each lap his Williams will pass over the words “Salut Gilles” painted across the finish line.

Jacques, son of Gilles, never won on the track but did claim a world title in 1997.

“Gilles was a bit before my time, so I didn’t really have a chance to watch him race,” admitted Stroll.

“To be the first Canadian to race here since Jacques is really an honour. He won the world championship with Williams in 1997, the year before I was born.

“Now 20 years later to be here in the Canadian Grand Prix, just memories of when I was a kid watching the race.”