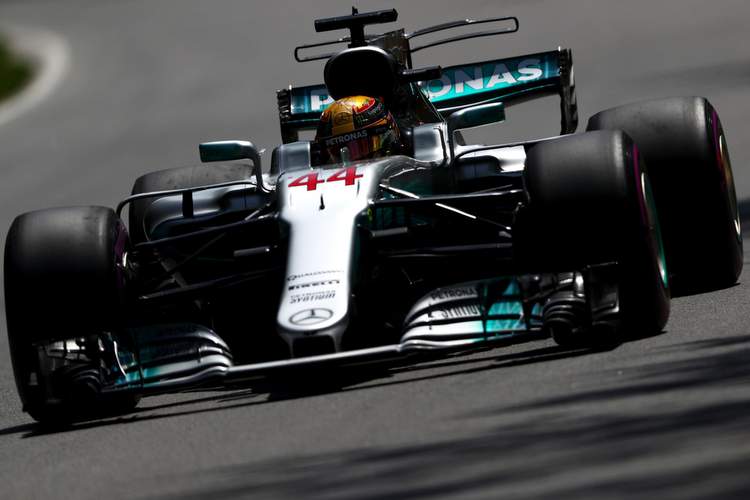 Lewis Hamilton delivered one of his greatest qualifying laps to turn the tables on Ferrari and claim pole position for the Canadian Grand Prix, and with it match Ayrton Senna’s record of top spot starts.

With Ferrari enjoying the upper-hand in the final free practice session in the morning, Hamilton showed his true worth as he dug deep to dethrone pace setter Sebastian Vettel with his final two flying laps.

His first lap in Q3 was good, but his run second was simply sensational and in the end three tenths faster than Vettel, notably three quarters of a second up on his Mercedes teammate Valtteri Bottas who was third quickest.

The time of 1:11.459 astounded everyone in the paddock and in the grandstands who cheered enthusiastically, and it was a fitting way for Hamilton to match his idol. A lap that even surprised his own team and worthy of matching Senna’s long standing record.

Hamilton said afterwards, “You fans are the ones that make this Grand Prix special for us. Montreal has been good to me down the years. It was a close battle but I was gunning and pushing. Luckily I got the good lap.”

“It was a sexy lap. A great lap. The team did great to learn from our mistakes in the last race. I owe this to the team,” acknowledged Hamilton.

At the end of the session, while speaking to fans at Turn 1, an emotional Hamilton was presented with a Senna worn helmet for matching the great Brazilian’s 65 career pole positions in Formula 1 – a gesture by the Brazilian legend’s family.

On receiving the yellow helmet in a glass case, Hamilton said, “I am shaking. I am speechless. Ayrton was my favourite driver. He inspired me to be where I am today. To receive this is a great honour. Thank you to the Senna family.”

The Reds were caught flat footed by Hamilton’s mega-lap, while Vettel scuppered the couple of chances he had and the team timed his runs badly as he was only availed a one lap run in the final minutes of Q3, while Hamilton had the luxury of two flyers at the very end.

Credit to the German for throwing everything he had at it, but in the end his lap was quick but ragged and the pressure conspired against him.

Nevertheless second place on the grid means that Vettel still has a very real chance of victory but, more importantly, fans have the prospect of another intriguing Vettel versus Hamilton battle.

Vettel said, “We have the pace. I am not so happy with my last run in qualifying. I probably pushed a little too hard.”

Afterwards Bottas conceded, “Lewis had a mega lap. Well done to Lewis and Seb, but the race is tomorrow.”

Kimi Raikkonen was fourth fastest, nearly half a second down on his Ferrari teammate.

The Red Bull duo looked up for a fight, but when the wick was turned up by Ferrari and Mercedes, in Q3, they had no answer. Max Verstappen and Daniel Ricciardo had to settle for fifth and sixth respectively – the Dutchman nearly a second down on Hamilton’s best and the Aussie a tenth down on his teammate.

Best of the rest was Felipe Massa in the Williams, the Brazilian thoroughly out qualifying his rookie teammate Lance Stroll who failed to make it out of Q1.

The Force India duo were up next, with eighth place going to Sergio Perez who was a tenth quicker than Esteban Ocon in ninth.

Nico Hulkenberg rounded out the top ten in the Renault, also outshining his teammate Jolyon Palmer who ended the session in 15th.

Final word to Mercedes F1 chairman Niki Lauda, “Unbelievable, incredible laps by Lewis. Not foreseeable, you don’t expect that he can be that quick. He went 1:11.4, and 1:11.7 was already a surprise. The car was good, he was perfect, and thank god the Ferraris are behind.”