Montreal FP3: Vettel on top as Ferrari have the edge 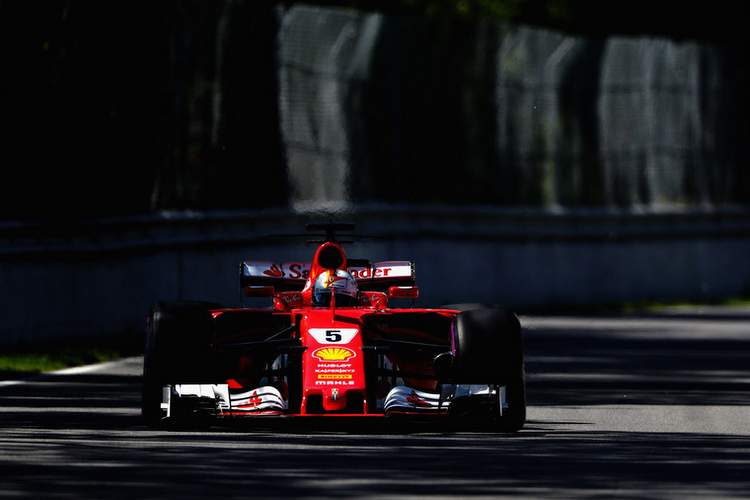 Sebastian Vettel has signaled his intent ahead of qualifying by claiming top spot on the timing screens at the end of FP3 as Ferrari edged ahead of their rivals in the one hour session at Circuit Gilles Villeneuve in Montreal.

Vettel’s best time of 1:12.572 was nearly three tenths quicker than his teammate Kimi Raikkonen in second place, confirming that the Italian team have a handy car in Montreal.

Chasing the Reds was Lewis Hamilton in third, 0.354 of a second down on Vettel’s benchmark hot lap, with Valtteri Bottas a quarter second down on his Mercedes teammate with the fifth fastest time.

Red Bull driver Max Verstappen split the Silver Arrows pair, the teenage Dutchman clearly intent on being part of the battle for top honours. Although his teammate Daniel Ricciardo, eighth fastest and over a half second down on Verstappen, has work to do to get in the hunt too.

Nico Hulkenberg was sixth fastest in the Renault, but over a second down on the top time while his teammate Jolyon Palmer struggled to match him, ending the session 15th and six tenths down on Hulkenberg’s best.

There was aslo a big gap between Williams teammates, as Felipe Massa powered to a seventh while his rookie teammate toiled away on his home track to set the 18th best time and nearly a full second down on the veteran Brazilian in the garage next door.

Force India’s Esteban Ocon had the edge over Sergio Perez, the young Frenchman ninth fastest and the Mexican 13th.

Carlos Sainz rounded out the top ten in the Toro Rosso, with teammate Daniil Kvyat 11th.

The top seven were covered by less than a second in the final free practice session, setting the stage for an intriguing qualifying shoot-out.