Hasegawa: I don’t give up but I can’t promise 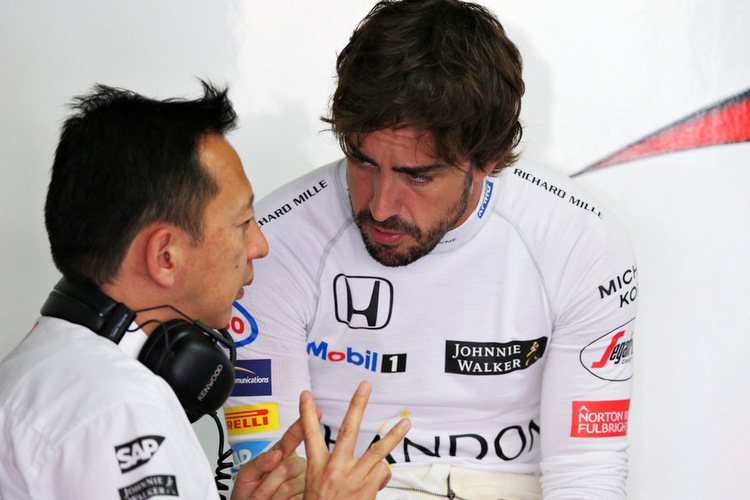 Despite mounting pressure from McLaren’s management and drivers, Honda boss Yusuke Hasegawa said on Friday that the engine manufacturer will not be forced into delivering an upgraded power unit until it is ready.

That delivery was expected this week at the Canadian Grand Prix but again McLaren drivers Stoffel Vandoorne and Fernando Alonso, back in the cockpit after missing Monaco to race at the Indianapolis 500, were left near the bottom of the timesheets on the first day of practice at the Circuit Gilles Villeneuve.

Double world champion Alonso, who is threatening to leave McLaren after three frustrating seasons if Honda does not produce a competitive engine, endured another challenging day, retiring from morning practice with mechanical problems.

The Spaniard missed most of the afternoon practice as well while work was being done on his car but once on the track turned in a confidence-boosting seventh best effort.

Vandoorne, however, was 19th out of 20 cars with his time of 1:15.624 nearly three seconds slower than pacesetter Kimi Raikkonen.

“It is very difficult,” a clearly uncomfortable Hasegawa told reporters. “It is unfortunate we can’t convince them we can do that (provide a good engine)… from a results point of view, of course, of much improvement from the performance and reliability point of view. So we need to do everything.”

Patience and time, however, appear to be running out for the Japanese engine maker.

McLaren executive director Zak Brown told Reuters on Wednesday that the partnership with Honda has not worked so far and that a parting of the ways was a real option under consideration by management.

Alonso upped the pressure on Thursday by giving Honda and McLaren a September deadline to start winning races again.

While the Spaniard was away from the team trying to chase Indy 500 glory, Honda had promised he would see an improvement in the engine on his return.

But the team did not deliver on the upgraded engine for the Canadian Grand Prix and Hasegawa could not say when the new power unit would be available.

“Actually we don’t promise,” said Hasegawa, denying they would have a new engine for the Montreal race on Sunday.

Asked when McLaren could expect the upgrade Hasegawa was non-committal, “It is too early to say, I don’t give up but I can’t promise.”

The second oldest and most successful team in Formula One after Ferrari in terms of race wins, McLaren are the only ones yet to score a point this season. They have not won a race since 2012.