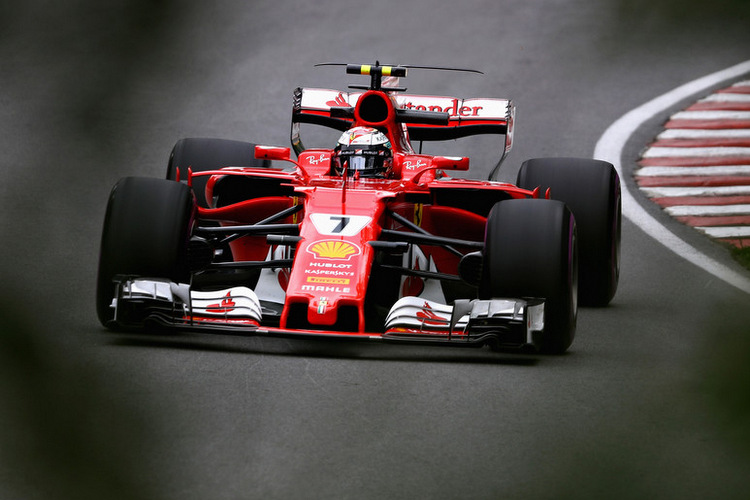 Kimi Raikkonen ended day one of the Canadian Grand Prix weekend top of the timing screens, beating Lewis Hamilton by two tenths of  a second as Ferrari, Mercedes and Red Bull (yes them too!) square up for an almighty battle at Circuit Gilles Villeneuve on Sunday.

Raikkonen, who started from pole last time out in Monaco, was the only driver to break into the 72 seconds zone with a best lap time of 1:12.935 which was 0.215 of a second up on Hamilton’s best in the ninety minute afternoon session.

Third fastest was Sebastian Vettel, five hundredth of a second down on Hamilton, with Valtteri Bottas fourth quickest.

Surprise of the day was the pace that Max Verstappen showed when he powered the Red Bull to the fifth best time, which was four tenths down on the benchmark time.

The top five were separated by a mere 0.453 of a second, setting the stage for what should be a thrilling qualifying and an intriguing race.

Felipe Massa was sixth fastest, suggesting that in his Williams he has a car that is suited to the high speed, low grip nature of the track in Montreal.

After a forgettable morning, where he parked his McLaren without hydraulic pressure after only 13 laps, Fernando Alonso was seventh fastest, but only managed 19 laps, half of what he would have wanted during the session.

Both Force India drivers were in the top ten, with Esteban Ocon eighth on the timing screens and Sergio Perez tenth. The pair split by Toro Rosso’s Daniil Kvyat in ninth.

It was a day of adventure on the challenging track layout with driver after driver spinning off the track.

Vettel was off in both sessions, while Romain Grosjean had his Haas spinning three times and Toro Rosso driver Kvyat was off twice.

Several drivers had big moments, however the infamous ‘Wall of Champions’ did not claim any victims on the day despite a number of drivers flirting with the paint.