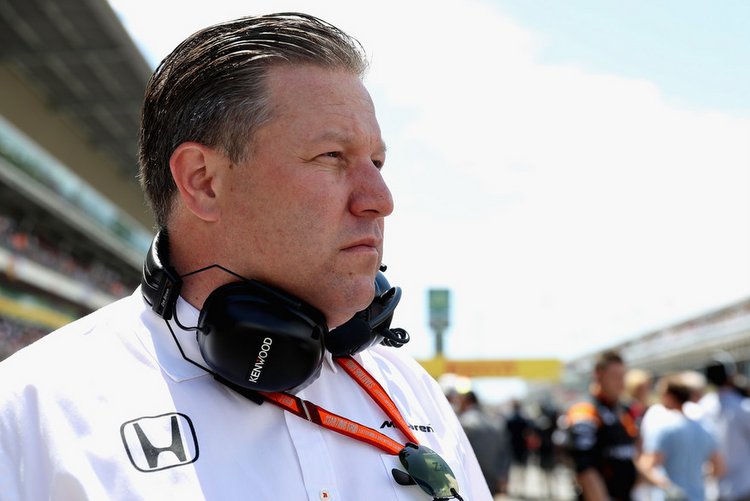 McLaren’s partnership with Honda has not worked so far and the team are now approaching a “fork in the road”, according to executive director Zak Brown.

Speaking to Reuters in his office at the Formula 1 team’s headquarters, Brown indicated clearly that a parting of the ways was a real option under consideration by management.

The American said engine upgrades promised for this weekend’s Canadian Grand Prix were not ready and the Japanese manufacturer could not say when they might be.

And while McLaren still wanted to win championships with Honda, there were serious concerns as to whether that was achievable.

“We were only told recently that we wouldn’t have the upgrade coming (for Montreal)…and we don’t have a definitive timeline, which is concerning because the pain is great and we can’t sit around forever.

“We were eagerly awaiting this upgrade as were our drivers and it’s a big disappointment that it’s not coming. It’s not lack of effort, but they are struggling to get it to come together.”

McLaren, the second oldest and most successful team in Formula One after Ferrari in terms of race wins, are the only ones yet to score a point this season. They have not won a race since 2012.

The renewed partnership with Honda in 2015 was billed as a return to the glory days, when French great Alain Prost and the late Brazilian Ayrton Senna dominated the late 1980s and early 1990s.

Instead it has brought failure and embarrassment to the former world champions, whose cars have failed to finish races — and sometimes even start them — due to engine failures.

Spanish driver Fernando Alonso, a double world champion whose future is uncertain, said in March that “we have only one problem, and that is the power unit. There is no reliability and there is no power.”

McLaren were ninth in 2015, sixth last year and this season could become their worst ever.

“The executive committee have now given us our marching orders,” said Brown, who is also chairman of the fast-growing Motorsport Network media group. “We’re not going to go into another year like this, in hope.”

“I don’t want to get into what our options are. Our preference is to win the world championship with Honda. But at some point you need to make a decision as to whether that’s achievable. And we have serious concerns.

“Missing upgrades, and upgrades not delivering to the level we were told they were going to, you can only take that so long. And we’re near our limit.”

McLaren have sounded out former partners Mercedes about a possible supply of engines, according to unconfirmed media reports.

“It will all come together,” said Brown, who said there were some big decisions to make in the next 90 days with the team needing to plan for the new car and give Alonso a reason to stay.

“There’s lots of things that go into the decision and we’re entering that window now of ‘which way do you go when you come to the fork in the road’.

Brown said the decision to partner with Honda in what has so far been an exclusive deal was “100 percent right”.

“However, so far it hasn’t worked,” he added. “A year in Formula 1 is an eternity. Three years is a decade. And you just can’t go on forever.”

Brown said there were clear advantages in a ‘works’ partnership but pointed to Red Bull and 2009 champions Brawn GP as examples of ‘customer’ teams who won titles.

Honda contribute more than $100 million a year to McLaren’s budget, according to informed sources, and some have questioned whether the team can afford to lose such sums.

Brown said the reality was that McLaren had lost some big, long-term sponsors and significant prize money in the last three years.

“When you actually look at the impact of loss of FOM (Formula One payments) money and loss of sponsorship, it starts to diminish the commercial benefits of what Honda brings to the table,” he said. “And when you start to net it out, it doesn’t have quite the commercial benefit it might appear from the outside.”

Big Question: What now for the McLaren-Honda partnership?