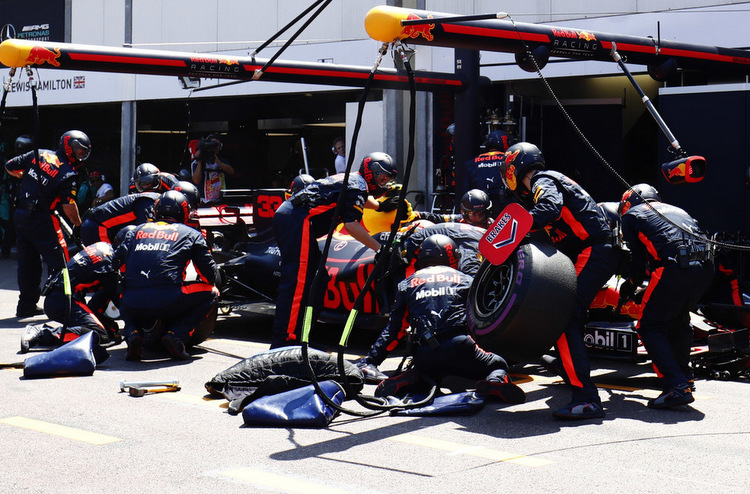 For the second time this season, Red Bull Racing complete the DHL Fastest Pit Stop in the 2017 Monaco Grand Prix.

Following on from the Russian Grand Prix, Red Bull Racing have now achieved the DHL Fastest Pit Stop for the second time this season. Daniel Ricciardo’s car was serviced in just 2.60 seconds in the Principality’s narrow pit lane, a hundredth of a second faster than Lewis Hamilton’s.

In the battle for third place, Ricciardo completed his only stop of the afternoon on Lap 38 – six laps after Valtteri Bottas and five laps after Max Verstappen.

As soon as Ricciardo had a clear run, he was able to up the pace on used ultrasoft tires to emerge back on track in front of Bottas and Verstappen. The Australian had been in only fifth place before the tire change.

“I can’t obviously complain how it worked out and I have to thank the team. It was cool to show some pace today and we had that clear track. I didn’t think the tyres had that much more but I just got into that rhythm, was able to punch out some good times,” said Ricciardo about his strategy.

Race winner Sebastian Vettel used a similar approach to Daniel Ricciardo’s. The Ferrari driver stopped four laps after team-mate Kimi Räikkönen, who was in the lead. Without another car in front of him, Vettel managed to squeeze enough time out of his used tires to take P1 after the pit stop.

“In the laps before my pit-stop I was surprised by my own pace, because earlier on, Kimi and I were both struggling with the rear tires,” said Vettel. “Those laps I did were comparatively better than the ones I did in qualifying.”

“It was impossible for me to predict how fast I could go today. At one point, I thought a second, maybe half a second, but then it turned out it was more than that, which was obviously crucial to grant me first place out of the box,” added the race winner.

Once at the head of the field, the German quickly drew away from his rivals and comfortably secured the first victory in Monaco for Ferrari since 2001. Vettel also extended his lead in the world championship standings to 25 points, as Lewis Hamilton only finished seventh. 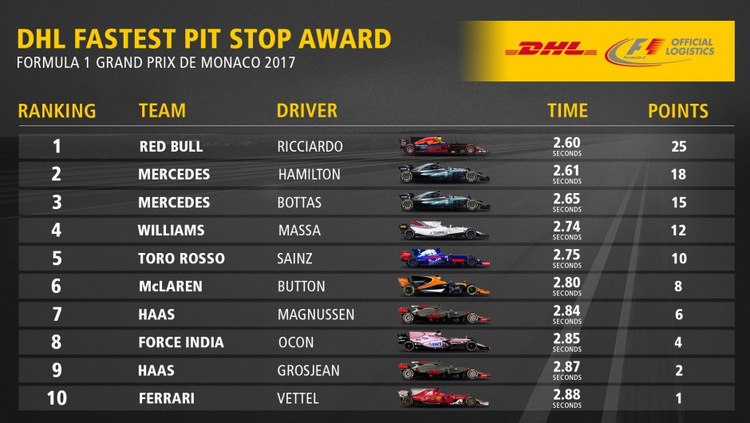 In the overall standings of the DHL Fastest Pit Stop Award, Williams on 145 points still lead from Mercedes but the gap has now been whittled down to only 17 points. Red Bull are in third place with 120 points, followed by Toro Rosso (73) and Force India (57).

Formula 1 heads next to Montreal for the Canadian Grand Prix and the seventh meeting of the season. Last year, Williams driver Valtteri Bottas was the fastest to be turned around and set back out on fresh tires, setting a time of just 2.43 seconds.