Inside Line: What now for Alonso? 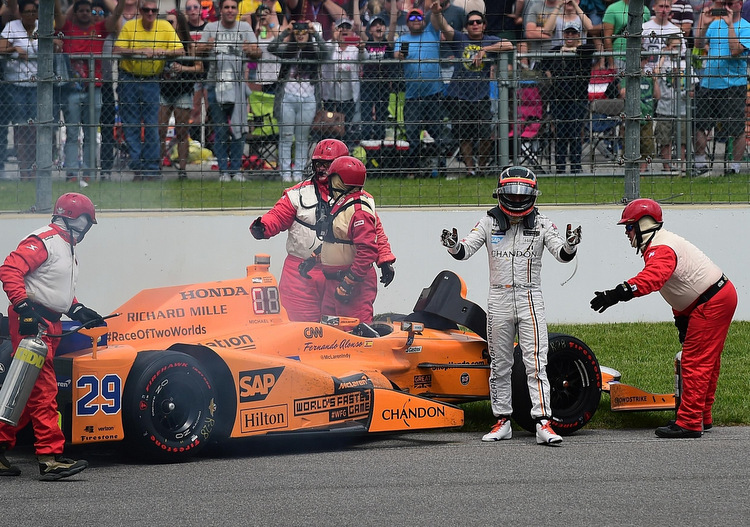 The one bright spot of his 2017 in the rear-view mirror, it’s back to reality for Fernando Alonso.

Sure, it may have ended as most of his other experiences with Honda engines have, but few would disagree that the Alonso we saw contesting the Indy 500 was a different person to the one previously moping around the F1 paddock.

As he prepares to make his return next week in Montreal, the question now is: which Alonso are we gonna get?

At least from McLaren-Honda’s perspective, the assumption would be that allowing Alonso to chase his Triple Crown ambitions would entitle them to a honeymoon period – as long as the good vibes of Indy persist, surely the Spaniard could deal with a few more disappointing races.

After all, they did him a solid by letting him skip Monaco, so why shouldn’t Alonso be expected to return the favour by staying his tongue in the press and on team radio?

Yet whether Alonso remains compliant for any amount of time remains far from a certainty. The Circuit Gilles Villeneuve will be a particularly bad track to make his F1 return, the multiple straights liable to leave the Honda engine exposed worse than Max Mosley.

Barring a miracle on par with his performance in Barcelona, it will be hard to get through that race without his blood pressure rising.

It’s also interesting that Alonso has come out today and immediately reiterated his “only goal” is a third world title, seemingly puttng the pressure back on McLaren to supply him with a race-winning car.

If McLaren don’t prove themselves capable of progressing towards that goal, will Alonso really be any more content after having had a chance to roam, or his despondency and rumours of a departure only return?

Even if he has no viable F1 options for 2018, his Indy sojourn has shown the value of an Alain Prost-esque sabbatical instead of continuing to dwell in the doldrums. At 35, the Spaniard is no spring chicken, but he’s still a ways away from being “too old” either.

He could certainly afford a year chasing his wider motorsport ambitions, the only risk being of course that McHonda gets its act together – something he’d have to weigh against the potential risk to his own sanity, should they continue to struggle.

As has been the case for much of this decade, there are no easy decisions for Alonso. As he showed on Sunday in Indianapolis, he can win anywhere given the right equipment – a question the next fourteen races are sure to ask of McLaren.

Of course there’s no way to know exactly what is going on in the Spaniard’s head, but who could blame him if his taste of the front-running life makes him hungrier than ever for a better drive – his Indy incursion not the start of something better, but the beginning of the end for his time with McLaren.