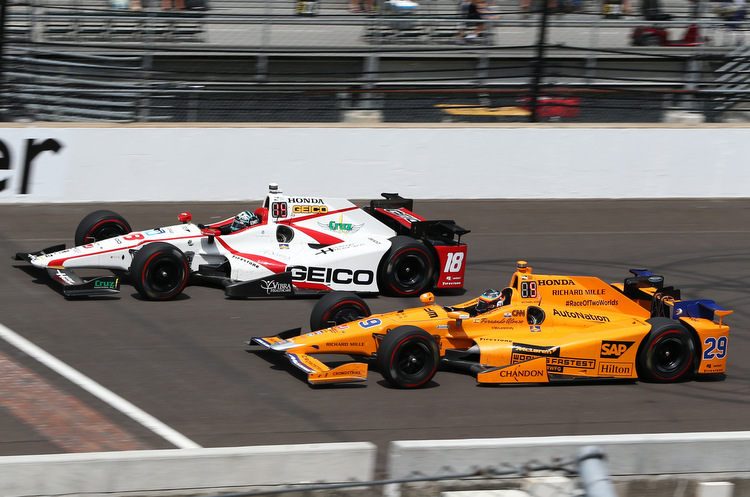 Fernando Alonso will be hoping to return to his McLaren Formula One day job next week with an Indianapolis 500 victory and another jewel in motor racing’s Triple Crown.

For over a century the Indy 500 has been a magnet to motor racing giants and thrill seekers eager to test their skill and bravery on the sprawling 2.5 mile oval known as the Brickyard.

Alonso, a twice Formula One world champion, is the latest driver to accept the challenge in a one-off bid to match the late Briton Graham Hill – the only man to claim the Triple Crown of motor sport with victories at the Monaco Grand Prix, Indy 500 and Le Mans 24 Hours race.

The 35-year-old Alonso has no experience of Le Mans either but has indicated that, while tackling the French race would be an easier leap because the cars are more similar, the challenge would have to wait until after Formula One.

When the Spaniard was granted leave by McLaren to skip the Monaco Grand Prix to chase Indy 500 glory on Sunday it seemed a far-fetched dream for a driver who had never sat in an IndyCar never mind trying out oval racing on one of the most notorious and dangerous tarmacs in all of motor sport.

But the Spaniard, twice a grand prix winner on the streets of Monaco, has proven to be a quick learner and has already showcased his immense skill by clinically coming to grips with the nuances of oval racing to qualify in fifth place.

“I feel ready,” declared Alonso. “Lacking experience for sure because my first time with everything that is going to happen from rolling starts and all these things, but at the same time I have worked very, very hard over the last month so I cannot be better prepared than I am.”

“Maybe it is not enough but I could not do anything more than this.”

No amount of time in the cockpit of his McLaren Andretti Autosport Honda could prepare Alonso for what awaits him on Sunday.

Widely recognised as the world’s biggest single day sporting event, drivers say there is nothing that compares to the sight of 300,000 plus spectators filling the sprawling grandstands for a day of high-octane action.

Held on the Memorial Day holiday weekend in the heart of the U.S. Midwest, where the winner chugs a quart of milk rather than expensive French Champagne, the Indy 500 is a unique American event.

This year 33 drivers, including four rookies, from 10 countries and both sexes will take the green flag.

Scott Dixon, the 2008 winner, grabbed pole position last weekend on a Sunday full of drama that began with him taking P1 and ended with a gun pointed to his head during a robbery while he was buying fast food at at a drive thru restaurant.

“This is the biggest event on the calendar each year and it’s the one we set out to win first,” said Dixon. “We finished second here a couple of times and it’s almost the worst place to finish when you come so close.

“We come here to win, and that’s the only goal. If we don’t achieve that, we’re disappointed.”

Brazil’s Helio Castroneves, a four-time pole sitter and three-time champion, signalled his readiness to fight for an elusive fourth win after clocking the top speed in final practice on Friday.

In more than a century of racing at the famed speedway only three men – A J Foyt, Al Unser Sr and Rick Mears – have finished the 500 on Victory Lane four-times and Castroneves is aiming to become the first non-American to join that exclusive club.

The Brazilian is part of the powerhouse Team Penske stable that includes an all-star lineup of Colombian twice winner Juan Pablo Montoya, reigning IndyCar Series champion Frenchman Simon Pagenaud, Australian Will Power and Josef Newgarden all trying to give ‘The Captain’ Roger Penske a 17th trip to Victory Lane.