Alonsomania at Indy a big boost for Indycar 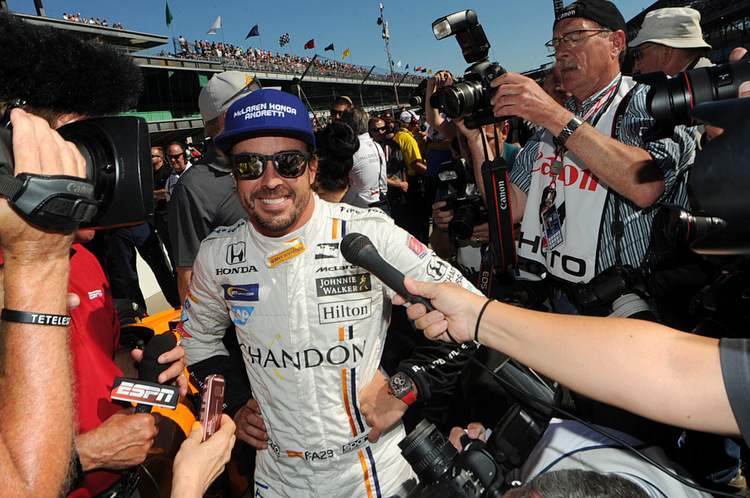 It was opening day at Indianapolis Motor Speedway and Fernando Alonso chose a skateboard as his means of transportation through the paddock, as he essentially turned the hallowed Brickyard into his own personal playground.

It has been all Alonso, all the time, since the two-time Formula One champion announced last month he would skip the race in Monaco to run the Indianapolis 500 for the first time. His presence has drawn massive worldwide interest to “The Greatest Spectacle in Racing,” and given Alonso a break from his depressing F1 season with McLaren.

Indeed, the run-up to the 101st running of the Indy 500 has seen a full-fledged case of “Alomania” and has come at the expense of many other aspects surrounding Sunday’s race.

As a thick crowd of international reporters pushed toward the seat Alonso was expected to take during Thursday’s media day, driver Oriol Servia approached and jokingly asked if they were waiting for him. After all, for more than a decade, Servia was the only Spaniard in the Indy 500. Now he calls himself “the other Spaniard.”

When Servia was asked earlier this month about Alonso, teammate Graham Rahal interrupted: “He’s the only guy racing here, isn’t he?”

No, there are indeed 32 others in the field. It just seems they have been overlooked. Earlier Thursday, online betting site Bovada released its Indy 500 odds and listed Alonso as the 9-2 favorite. Three-time Indianapolis 500 winner Helio Castroneves? 12-1.

Alonso said being the betting favorite is “probably not” a fair expectation, and noted that the last time he did a rolling start was in a 1997 go-kart race. But he thinks he’s done everything possible to prepare for the race, and even spent time Thursday on a simulator.

“I know this is a race that everyone has a chance to win; this is an unpredictable race,” he said. “We all have a possibility. I think I have a lower chance than some of the big names because I am lacking that experience. But if I have a chance, I will go for it.

Alonso has certainly thrilled IndyCar’s fan base, which has breathlessly followed his every move. It wasn’t until 2008 winner Scott Dixon turned in the best qualifying effort in 21 years to win the pole that the spotlight briefly shifted to someone else.

Dixon, who was robbed at gunpoint in the drive-thru line at Taco Bell a few hours after winning the pole, doesn’t feel snubbed. He considers Alonso a legitimate contender because he’s racing with Andretti Autosport – winner of this race last year with rookie Alexander Rossi – and because “the caliber of driver he is, it seems like he’s definitely soaking it in.”

But is there any jealousy?

“Maybe some of the fame whores, I don’t know,” said Dixon, a four-time IndyCar champion. “It’s not something I converse about.”

One seat over from Alonso during the media session sat Tony Kanaan, a 20-year veteran, series champion and former Indy 500 winner. Alonso decided he was done answering questions before the hour-long session was over, and made his way to Kanaan, a massive entourage stalking him.

He presented Kanaan with a hat, and Kanaan pretended to interview Alonso, joking that since Alonso’s much-hyped arrival on that skateboard, one of the most popular drivers in Indianapolis history has had to find a new job.

“We have one superstar who has come from Formula One to race here, so it’s a big deal,” Kanaan said. “It’s the best race in the world. He’s caught a lot of attention. He does have a chance, but I can name three or four other guys that I would put my money on this weekend.”

In terms of hogging all the attention, Kanaan is much like the other veterans in that he doesn’t mind.

“We’ve all been here a long time,” Kanaan said. “Does he deserve all this? I think 100 percent. He brought a lot of awareness to the European market. We’ve been through a few (stars) in our career. We went through the Danica (Patrick) phase. Selfishly, you could get jealous as a driver, but big picture, we are all benefiting from him being here.”

Zak Brown, a former Indianapolis-based sports marketer who’s now executive director of the McLaren Technology Group, said, “I think it’s a breath of fresh air for him. He is enjoying it. He’s doing all of it. He wants to do it. He feels very welcomed by the IndyCar club.”

“I think clearly he’s getting the most awareness right now. But he’s getting awareness not just for himself, but for Indianapolis, for IndyCar, for Formula One. I think it’s a good story. It’s a huge story. Might be the dominant story.”