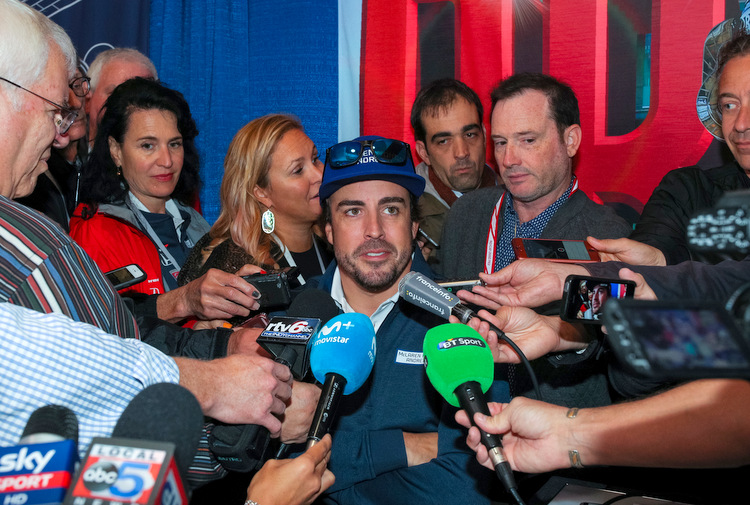 There is no mistaking who the headliner is at this year’s Indianapolis 500 as Fernando Alonso hogged the spotlight on Media Day at the Brickyard on Thursday.

Alonso, the twice Formula One world champion who is skipping the Monaco Grand Prix to chase Indy 500 glory, has provided a captivating storyline that has dominated the build-up to Sunday’s race.

The Spaniard’s presence has overshadowed just about everything and everyone at the sprawling speedway, including Media Day where 32 other drivers were left to watch the Alonso Show.

While a media mob surrounded the podium Alonso was put on, with two of IndyCar’s biggest stars flanking him, three-time Indy 500 winner Helio Castroneves and pole sitter Scott Dixon were left in the shade.

“It’s a great story,” Dixon said smiling. “He’s one of the best drivers of all time so it is great to have him over here.”

Zak Brown, Executive Director of the McLaren F1 team who put together the deal to free Alonso, said the Spaniard had owned the Indy spotlight but it was the rising tide lifting all boats.

“I bet there’s more people that know Scott Dixon today than before pole internationally,” said Brown. “Obviously, Scott is a superstar, but this will have only exposed more people to him. I think it’s a good story. It’s a huge story but I think it’s good for everybody.”

The jump from Formula One to IndyCar and oval racing has been stark but the real culture shock for Alonso has come away from the track.

While Formula One drivers are safely cloistered from fans, with the exception of the A-listers who stroll the paddock stopping by team hospitality suites to snack on caviar and sip Champagne, in IndyCar they are constantly in the public eye.

Media Day was a new, if not jarring, experience for Alonso who was plopped on a podium to answer questions for an hour, an experience probably as gruelling as any he faces on the track.

Carb Day on Friday will be the last time Alonso will be in the car before Sunday’s race but his work will be far from done.

There is the Indy 500 parade on Saturday and a morning autograph session where he is likely to develop writer’s cramp. There is also a long list of sponsorship obligations including the Andretti Indy Gala.

“You watch the F1 guys, they are not as accessible, you can’t talk to them, no autograph sessions,” said Brazilian Tony Kanaan, the 2013 Indy winner. “I told him: Man you are going to be busy.

“Hopefully he listened to me, if he didn’t he’s already figured that out. I think it was a wake-up call for him. Not in a bad way, it’s just what we do here.”

It has certainly not been a typical week for Alonso. He visited an Indianapolis school on Wednesday and was part of the Indy 500 media blitz that saw the 33-car field scatter across the United States and Canada on Tuesday to promote Sunday’s race.

Alonso says he has enjoyed every moment of his Indy experience but it is not something that would work in the secretive high-tech world of Formula One.

“The close contact with the fans here is good. It’s fun, and you enjoy them,” said Alonso. “I think if you do that in Formula 1 with the level of technology, sophistication, all the hard work in terms of making small differences on the cars, it would never work.”

“Probably that formula that we have in Formula 1 would never work here because it’s too complex to understand all the technology that is around the cars, but probably the fans out here, they don’t care about what we have inside the engine cover.