Alonso: The biggest challenge I face is running in traffic 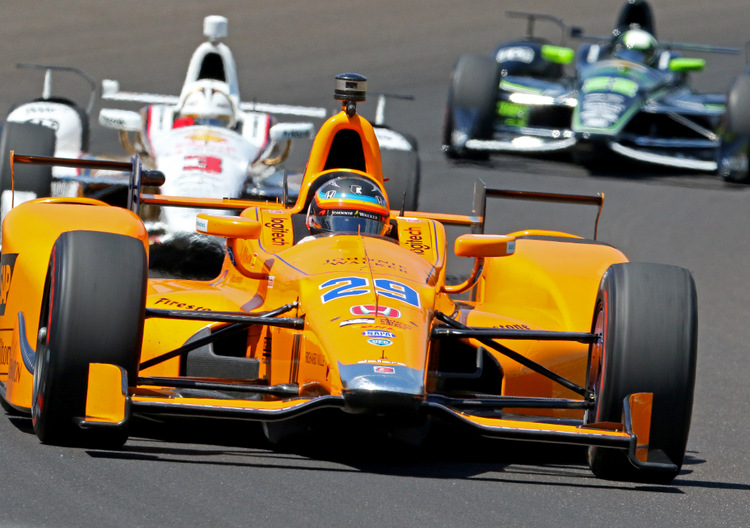 Twice Formula One world champion Fernando Alonso surprised himself with his qualifying success for Sunday’s Indianapolis 500, but the Spaniard knows his biggest challenge will come on race day.

Alonso, racing on an oval for the first time, averaged more than 230 miles per hour (370 kph) to qualify fifth fastest for a place in the second row in the 33-car field at Indianapolis Motor Speedway.

“I was a bit surprised,” the 35-year-old Alonso told Reuters on Tuesday. “When we announced to come here one month ago, we did it without knowing how competitive we could be, if I was able to adapt to oval racing, to these cars.”

A lack of experience may cost him on the biggest day of U.S. racing when a champion will be crowned after 200 laps of the massive 2.5-mile oval, but Alonso is geared up for the chance.

“You respect the place, respect the speed. You respect your colleagues out there but at the end of the day, when you are in your car and close the visor, you would like to have one mile per hour more. It’s never enough,” he said.

While Alonso passed the entrance exam with flying colours in qualifying, he knows the hardest test is to come.

“The biggest challenge I will face is in the race when you are running in traffic, those groups of cars that form in the race. It changes completely the behaviour of the car.

“You feel the car very loose… we’ve been practising that with the team, trying to create our own groups because we are six cars,” Alonso said.

“I still lack experience in important moments of the race. I will try to compensate with the speed, with motivation and we will see what happens.”

Alonso said timing his moves may be a guessing game, “Taking the opportunity to overtake and to pass will be a difficult decision to make. There are many factors you need to address while you are driving 230 miles per hour.

“You have to stay calm, be ready for the last one-third of the race. That is where it comes.”

Alonso said the race demands a balance between pushing the limit and not crossing the line into recklessness.

Yet there is no place Alonso would rather be on race day, “On Sunday when race time arrives, 300,000, 400,000 people at a sport event has no comparison to any other sport event in the world. The Olympic Games and Super Bowl cannot put 400,000 people in one place on one Sunday.”

The Indy rookie does not rule himself out for a win that would make him the first F1 champion to triumph since Jacques Villeneuve 22 years ago.

“I think anyone can win the Indy 500 of the 33 drivers because it is an unpredictable race,” he said.

“There is not a plan that you think in advance. You need to keep improvising. I go there knowing that the race is going to be difficult and I will lack experience in critical moments. But I want to live the moment, I want to live the experience,” concluded the Spaniard.