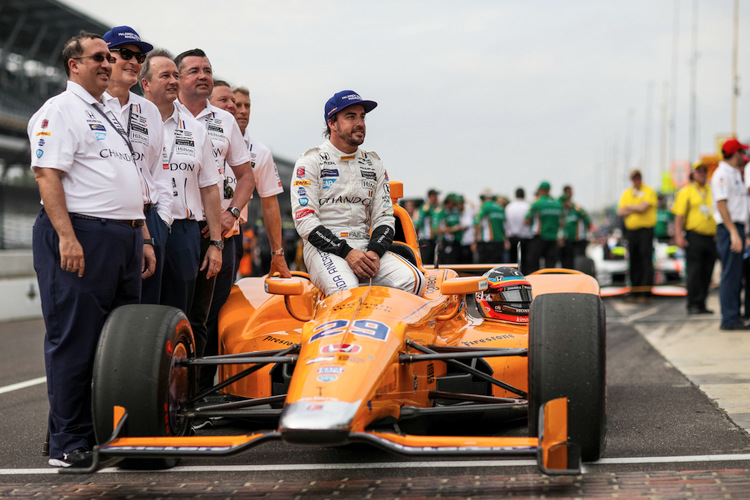 Two-times world champion Fernando Alonso said his racing in this Sunday’s Indy 500 spurred great interest in Spain and that other Formula One drivers crossing over would benefit both U.S. racing and Formula One.

“I think its a win-win situation,” the Spaniard said about the potential impact of more F1 drivers following his example and crossing over between the circuits.

Alonso said he understood that interest back home in the Indy 500 had spiked by 800 percent.

“For the fans, from what I see now in Spain and Europe, it is amazing the interest in the Indy 500 this year compared to any other year,” he said.

“Everyone in Spain, they are waiting for May 28 to watch the race. I received many messages from fans in social media saying, ‘thanks for showing us this race because I never watched it before and I absolutely love it.'”

Alonso also believes U.S. fans will become more intrigued by Formula One as they get to know those drivers.

“Hopefully from now on the interest in Formula One in the U.S. will be growing,” he said. “We have new owners of Formula One, (U.S.-based) Liberty Media, and I think they have some good plans to build interest here.”

Alonso decided to skip this week’s Monaco Grand Prix, which he has won twice, to try and add the Indy 500 as his second leg to a rare Triple Crown of Motorsport.

The Spaniard hopes to emulate Graham Hill, who in 1972 became the first to complete the Formula One championship, Indy and Le Mans 24 Hours collection of titles.

“The Triple Crown, I think that’s the ultimate goal of any racing driver,” said Alonso. “Only one man has achieved that in motor sports and that shows how difficult it is to do that.”

Alonso said he expects no problem adjusting back to Formula One after his Indy sojourn, “My skills, and my driving techniques are developed in Formula One cars. I think when I get back there it will be an immediate adaptation.”

With his contract up after this season with the poorly performing McLaren-Honda team, Alonso remained tight-lipped about his future.

“After the summer I will consider what are the options out there,” he said.