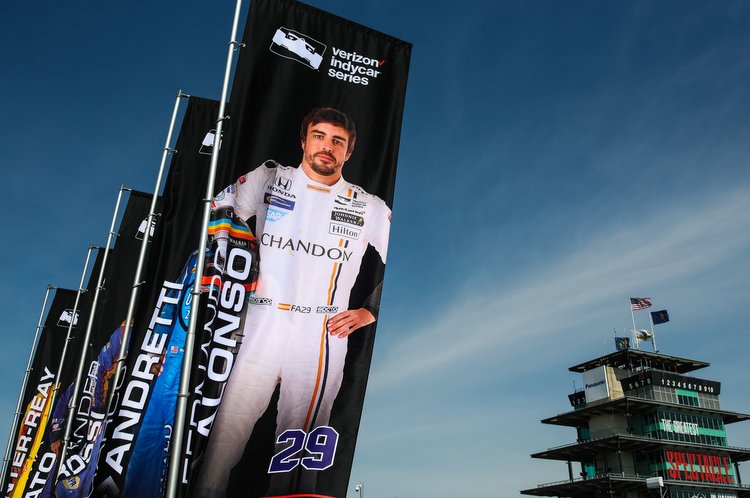 If Fernando Alonso were to beat the odds and win the Indianapolis 500 on May 28, the double Formula One world champion will be one step away from the ‘Triple Crown of Motorsport’.

That much is certain. But there is still some debate about what three jewels actually feature in a crown only ever worn by one man.

“I´ve won the Monaco Grand Prix twice, and it´s one of my ambitions to win the Triple Crown,” Alonso said in the McLaren statement that announced his intention to skip Formula One’s showcase Monaco race to compete at Indianapolis instead.

“I don´t know when I´m going to race at Le Mans, but one day I intend to. I´m only 35: I´ve got plenty of time for that,” added the Spaniard.

McLaren listed the Monaco Grand Prix, the Indianapolis 500 and the Le Mans 24 Hours sportscar race as the three components of the crown. Other sources, including the official Le Mans website (www.lemans.org), concur.

But that was not how the late Graham Hill, a five times Monaco winner and also a double Formula One world champion like Alonso, saw it after completing the only triple crown to date at Le Mans in 1972.

“It’s the (F1) world championship for drivers, Indianapolis and the Le Mans 24 Hours,” he told broadcaster Shaw Taylor in a 1975 interview for the Thames Television ‘Drive In’ programme that can be tracked down on YouTube.

“Indianapolis produced more loot than the others,” he continued when asked which race had been the most enjoyable.

“Le Mans I thought was a very nice thing to have won after several years of trying, and it did mean that I did win the Triple Crown.”

His wife Bette, in her 1978 book ‘The Other Side of the Hill’, also describes it that way.

For Alonso the argument over whether it is Monaco or championship that counts is academic, since he has also won both, but he told Reuters that he considered the championship to be more significant.

For others, the distinction does matter in the argument about who has come closest to matching Hill.

Canadian Jacques Villeneuve has a strong claim, having won the F1 championship in 1997, Indianapolis in 1995 and finished second with Peugeot at Le Mans in 2008. He never won Monaco, but that does not trouble him.

“It’s the world championship that counts,” he told Reuters. “Monaco is just one race that´s part of F1…you can do the Indy 500 and Le Mans on their own, you cannot just do Monaco on its own.”

“I think some people think about it (as part of the triple crown) because in the 1950s it was kind of a stand-alone race, it was very different,” he said. “But the championship has the value.”

For those who argue that Monaco has to be part of the Triple Crown, because it is a race like the other two, then Juan Pablo Montoya can claim to have come closest most recently. The Colombian has won twice at Indianapolis and triumphed at Monaco in 2003 with Williams.

Britain’s Jim Clark won Indianapolis, chugging the winner’s bottle of milk, and the F1 title but not Monaco — a race he missed when he won at the Brickyard in 1965.

“My dad won all the Monaco grands prix that Jim didn´t win because he was in Indy, I think,” Graham’s son Damon told Reuters, with a smile.

“The funny story is that there was some mix up over the lap chart (in 1966) and so my dad wins it and then Jim says something like: there might have been a mix-up, I might have won the race. And Dad says” too late, I´ve already drunk the milk.”

On another level, Hill welcomed Alonso bringing the Triple Crown back into the general conversation.

“It couldn´t have been better timed because someone in Germany has just brought out a Graham Hill range of men´s grooming products,” he grinned.
“Maybe it should have been called the ‘Triple Crown’ or something.”