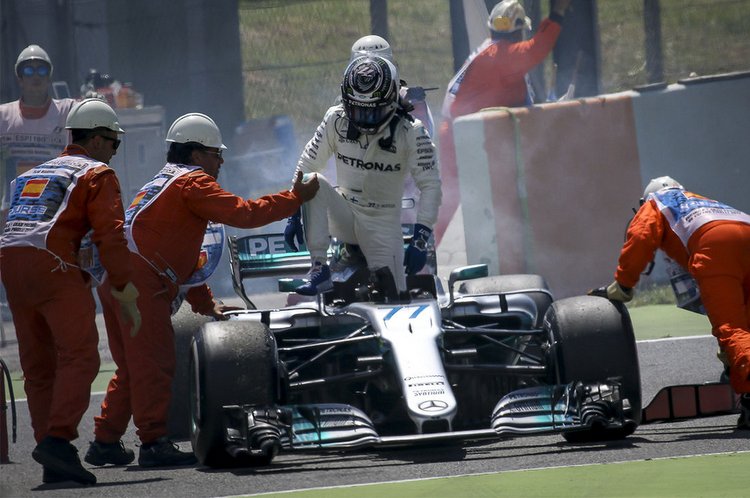 Mercedes driver Valtteri Bottas received a pat on his back, from his boss Toto Wolff, for the role he played in helping Mercedes teammate Lewis Hamilton beat Ferrari’s Sebastian Vettel in the Spanish Grand Prix.

Bottas was involved in a first turn melee, but survived to enjoy a thrilling battle with Vettel for several crucial laps, which at the same time cost the Ferrari valuable time.

But in the end, the damaged Bottas sustained on the opening lap forced him to retire from the race, however he had played an useful role for his team on the day.

Wolff acknowledged, “Valtteri played an important role in Lewis’ victory because his position was third before the failure and he couldn’t really do anything anymore. Probably the car was damaged after contact to Kimi in T1, and he held on to it to bring in valuable points for himself and the team, and then unfortunately we had the engine problem.”

“It was real teamwork. Not to forget the one that lost out here, Valtteri, keeping him out, made Sebastian lose valuable lap time – five or six seconds behind Valtteri – overall it was a great team result. Team result meaning the driver, the team, the teammate, everybody.”

With regards to the first turn incident, Wolff recalled, “He was almost side by side with Lewis, he could have dived in but it was too risky to go in such a maneuver against your teammate, and then he realized, with Kimi coming from the outside, and he was aggressive enough to stick his nose which then caused the collision with Kimi and then Verstappen. So I think overall Valtteri’s start and maneuver in lap one, protecting his teammate, was pretty good.”

With regards to the failure that stopped Bottas on lap 38, of 66, Wolff explained, “The problem started when putting the new engine in, we discovered a problem and we knew we would be extending the mileage, and it’s unfortunate. We had it in the past, and [in Spain] it bit Valtteri.”