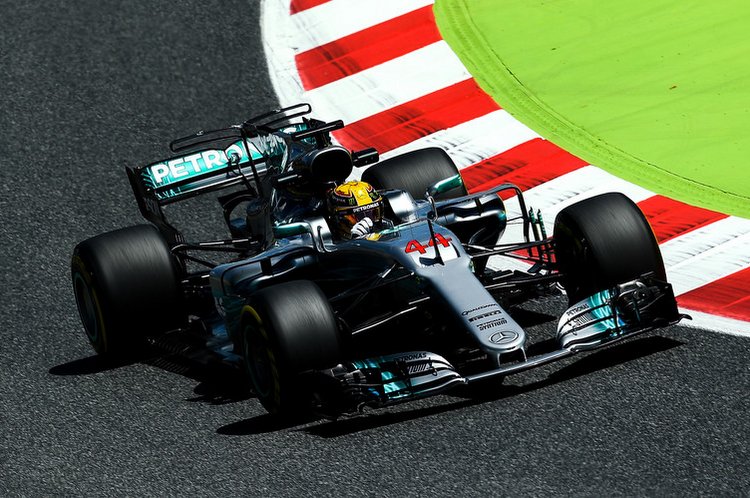 Lewis Hamilton powered to pole position for the Spanish Grand Prix, with Ferrari driver Sebastian Vettel a mere five hundredth of a second shy of the top time  and will start the race on the front row.

Hamilton’s first flyer in Q3 was good enough to ensure he starts from the top spot on the grid for the 64th time, while Vettel was left to rue a tiny error in the final turn that might have made the difference between pole and second place on the grid.

Hamilton said afterwards, “The fans are amazing and I have been growing here over past 10 years, amazing job by team. I could see the fans cheering and the flags were out and is a morale boost when it is not your home circuit.”

Vettel survived an early scare when he was told to stop the car on his first out lap in Q1, but a systems reset resolved the malady.

He reflected, “I am afraid it was [the last corner]. The last chicane is a tricky one for me. It was very close, well done to Lewis. It was a busy morning, big thank you to the team for the change in the last few minutes.”

“They did an engine change in sub two hours.  It is a miracle they got me out. It would have been nice to get them pole but hopefully a good race,” he added.

Valtteri Bottas was third in the other Mercedes and will share the second row with fellow Finn Kimi Raikkonen in the Ferrari.

Bottas said, “I am very pleased and it is always a good starting point when you start from the second row and the guys did a great job to get the car back on track.”

Next up were the Red Bull duo with Max Verstappen a tad over three tenths of a second up on Daniel Ricciardo, an all blue third row for the race. They were half a second off the pole winning time, closest they have been all year, and now will be itching for the forthcoming Renault upgrade.

Star of the show in front of his home crowd was Fernando Alonso who wrestled the problematic McLaren-Honda to seventh on the timing screens after a frustrating Friday for the Spaniard. His performance was cheered around the circuit by the home fans

“Maybe it was at the oval I learnt how to go quick on the straights,” joked Alonso afterwards with a big grin. “P7 is a gift and we will see what we can do in the race. This is a circuit that is difficult to overtake but we will try to get a position.”

After detecting a potential problem during FP3, Ferrari opted to change the German’s power unit ahead of the session.

Taking to the track in Q1, Vettel thanked his team for the quick turnaround but after setting an opening time good enough to secure passage through to Q2, his race engineer quickly radioed through to tell him to “stop the car”.

That was then revised to Vettel being asked to nurse the car to the pit lane, which he managed to do. The German was eventually able to rejoin the session.

Behind Vettel, Valtteri Bottas, who also had an engine change, though his was done overnight, was fourth ahead of the Red Bulls of Max Verstappen and Daniel Ricciardo.

At the back it was a dismal outing for Toro Rosso’s Daniil Kvyat. While team-mate Carlos Sainz managed to end the session in the top 10, Kvyat remained rooted to the foot of the order and was ruled out of further competition in P20. Also eliminated at this stage were Sauber’s Marcus Ericsson, Renault’s Jolyon Palmer, Williams’ Lance Stroll and McLaren’s Stoffel Vandoorne.

Hamilton was again to the fore after the first runs in Q2, leading on a time of 1:20.210 ahead of Vettel, Bottas and Raikkonen. As the teams prepped for their final runs, the man occupying the final Q3 berth was Alonso.

Local hero Alonso put in a superb final flyer to find three tenths of a second and as his rivals’ final times came in those fractions became crucial as he rose to P8 and then slid back to P10. In the end, though, he held the place, with just under eight hundredths of a second in hand over Haas’ Kevin Magnussen. Eliminated behind the Dane were Sainz, Hulkenberg, Grosjean and Sauber’s Pascal Wehrlein.

And Hamilton maintained his grip on P1 after the first runs of Q3. Bottas was first across the line but a big slide through the final corner left the Finn with a P1 time of 1:19.390. That was swiftly bypassed by Hamilton with a lap of 1:19.149.

Behind the Mercedes pair Raikkonen was third, five hundredths behind Bottas, with Vettel fourth a tenth further back. The third row of the grid was provisionally made up of the two Red Bulls, with Verstappen to the fore, almost half a second clear of team-mate Ricciardo.

With three tenths in hand over his team-mate it looked like Hamilton was in the clear. Vettel, though, was determined to have his say and the Ferrari driver was the only one of the top four to find significant time on the final run.

It wasn’t enough, however. While he improved to 1:19.200 and Hamilton failed to gain time, the Mercedes driver still managed to cling on for his 64th career pole, finishing just 0.051s ahead of the title leader.

Bottas took third ahead of Raikkonen who made a mistake in the final sector after setting the fastest first sector of the session. Fifth place went to Verstappen, while team-mate Ricciardo had a strangely muted Q3, finishing half a second behind the Dutchman in P6.

Alonso put in a huge performance to qualify his McLaren in seventh place ahead of Force India’s Sergio Perez, Massa, and the second Force India of Esteban Ocon.