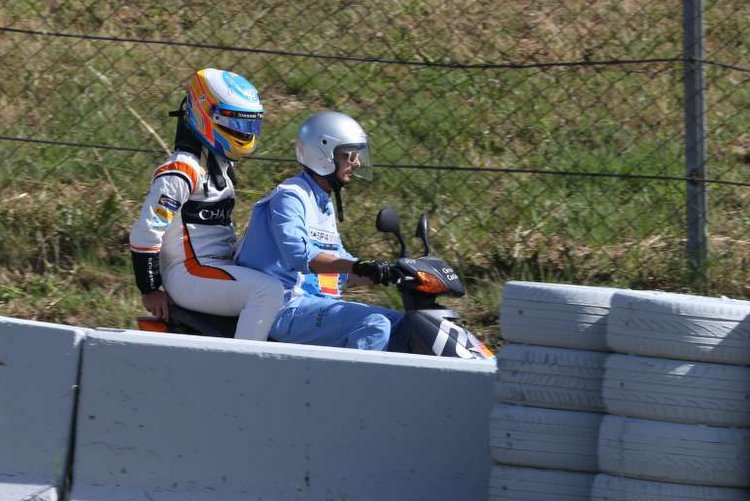 Fernando Alonso spent more time on the tennis court than driving his ailing McLaren on Friday, with his tilt at the Indy 500 looking ever more inviting after another dark day on the Formula One racetrack.

Alonso’s home fans had barely settled in their seats for practice at the Spanish Grand Prix before his car’s Honda engine blew in a mess of smoke and oil. Liquid then poured out of the car as it was tipped up by a recovery crane.

Having failed to start in Russia two weeks ago due to an engine failure on the formation lap, Alonso departed the Barcelona circuit after a few choice words and later posted a picture on Instagram of himself playing tennis.

“The engine was not good enough,” Alonso told reporters. “We went out of the pit lane and there was a hole in the engine and the oil was going out. The engine blew up after 400 metres so I guess it was not ready for FP1.”

“It was more or less expected that we would have these problems. It was a shame here in front of the people which is frustrating. At the end of the day, we’ve had some good Fridays and Saturdays but bad Sundays, so I have feeling this one will be a bad Friday but a good Sunday.”

He was last on the timesheets in FP2 and reported that the engine was even slower.

If the tennis photo looked like a dig at Honda, accompanied with the seemingly sarcastic comment “keeping the body active”, he said that had not been his intention.

“I have very little time in these weeks, with travelling, with planes,” said the 35-year-old, who will go straight from Barcelona to Indianapolis on Sunday night to prepare for his debut in the 500 on May 28.

“So when I discovered that I had two hours free, instead of being on the sofa and watching television, I went for some training. My dedication is still 100 percent to my fitness and my preparation.

“It wasn’t humour to go outside the circuit to play tennis, it was preparation. People got it wrong. I went out to have some fun and escape the circuit.”

McLaren, the second most successful team in Formula One history in terms of race wins, have yet to score a point in four rounds of this year’s championship and are last in the standings.

Honda’s Formula One reputation, after two seasons of unreliability and poor performance, is meanwhile being dragged deeper into the mud.

Alonso is out of contract at the end of the season and has said his future whereabouts would depend on who could offer him a winning car.

“It’s not my reputation, it’s theirs [Honda’s] — and it’s their money, and their image,” he said. “I try to drive as fast as I can but it’s a much bigger problem for them.”

Honda F1 chief Yusuke Hasegawa was not sure what caused the problem lending credence to the theory that the engine builders have no clue why their power unit package is such a failure hence there is no solution to resolve the issues.

Hasegawa tried to explain, “The oil pressure dropped completely. The engineer told Alonso to stop the engine, but it was too late.

“There was a big hole in the bottom of the engine and the oil is missing. I don’t know the reason why the oil leaked, but that is the reason why it blew,” added Hasegawa