Hamilton: We have a good understanding of what went wrong 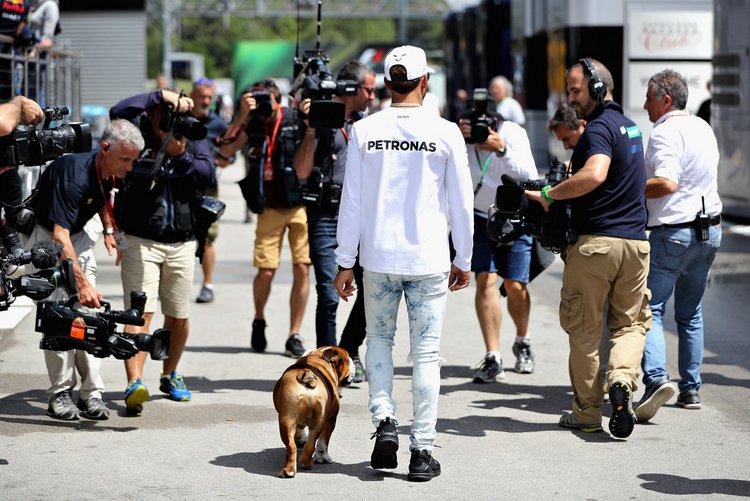 Lewis Hamilton is hopeful his Mercedes team have solved the performance problems that hit him at last month’s Russian Grand Prix.

The three-time champion finished fourth behind triumphant team-mate Valtteri Bottas and both Ferraris in Sochi, leaving the circuit baffled by his lack of pace.

But on arrival at the Circuit de Catalunya, along with his dog Roscoe, ahead of this weekend’s Spanish Grand Prix, the Briton said Mercedes had a “good understanding” of his Russian troubles.

“Coming into this weekend, we have a good understanding of what went wrong,” he said, having brought Roscoe into a pre-race news conference where he slept under a table.

“There has been analysis, as there is race-to-race. We have grown from experience, of having won with a fast car and a car that struggled in so many areas. I definitely think we are better equipped now, but I can’t say it will be better this weekend…”

“I hope it will be. There will be upgrades for everybody and we will be doing work tomorrow to get the car in the right place.”

Hamilton said he had struggled to extract performance from his tyres.

“It was just a bunch of small things that all added up in one pot. Nothing in particular… Not a single one thing that was bigger than another. That just led us in slightly the wrong direction, but it should be better this weekend.”

“It is a tyre issue… the tyre window working range is quite small so, the whole weekend, I was generally not in the right window with it…”

Hamilton brightened up when asked to lift Roscoe up in full view of a room crowded with reporters. “He’s asleep and he’s too heavy to lift,” he said.

On a day when he revealed his favourite Star Wars’ sabre colour would be purple, he was asked also if he had seen or spoken to his former team-mate, retired 2016 champion Nico Rosberg.

They both live in Monte Carlo in the same residential development, “Yes, I did see him, curiously. In London. I was out running…”

Hamilton recounted hearing someone running behind him, during a training run, and turned to discover it was Rosberg.

“We had a chat,” he said. Asked who was running fastest, he smiled. “Well, he was trying to catch up wasn’t he?”