Fraboni: We are there 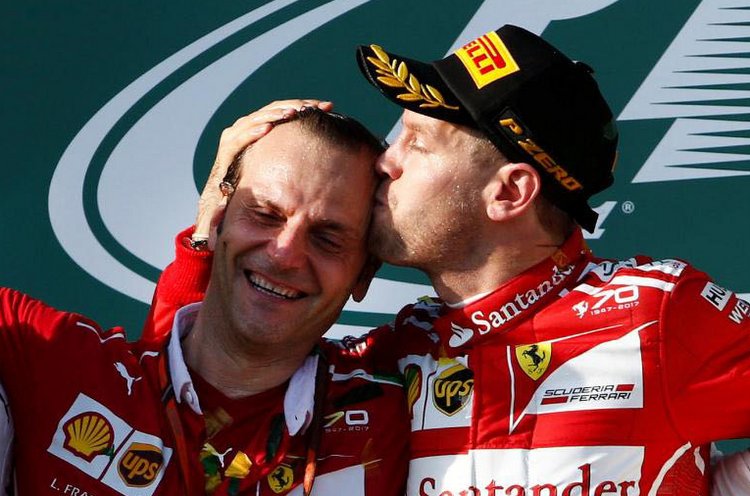 Ferrari must be applauded for reeling in Mercedes over the winter and establishing themselves as title contenders this season, but Ferrari’s engine boss Luigi Fraboni (pictured above with Sebastian Vettel on the podium in Melbourne) reveals that closing the gap was no fluke and that development of the SF70-H and the power unit will be sustained throughout the season.

In the final qualifying of the 2016 season, at the Abu Dhabi Grand Prix, Lewis Hamilton’s pole winning time was nearly a second faster than the best placed Ferrari of Kimi Raikkonen. The time was set in Q3 when everything is dialed up to the max. That was the gap that needed closing in the winter by the Reds.

The big question is: who quickest right now?

Fraboni shared his views ahead of the Spanish Grand Prix weekend, “Difficult to say who is better or who is slower. I think the pace of the cars is quite similar in the last races and of course the evaluation of the power depends on track that you have and the car. But from our understanding we are there.”

Last year there were reports of disharmony at Maranello among the workers who were said to be working in a environment of fear, coupled to well documented instances of tensions between team chief Maurizio Arrivabene and Vettel.

Whatever the case, big credit to Arrivabane for galvanising the team, setting goals, keeping focus and delivering a title contender from the moment the season started in Australia.

Fraboni recalled, “Of course, it was a very tough job over the winter because we know that the general approach is to try to do well, the maximum, but also we know that we had to close some gap. And I think we have worked on everything.”

In past years Ferrari could be accused of starting strongly but losing steam as the season progressed, while their rivals improved.

“As we said last year we are happy to take off the token [system] so we have the possibility to continuously develop the engine. So at the moment the program is to bring the maximum that we can to every race. And then about how we split the power unit, that depends on how is our development in-house.”

“I think it’s much more flexible on this side [without tokens], so we try to take the opportunity. We are trying a lot more stuff knowing we are more free during the season, so for sure it was a good step for us,” added Fraboni.

Big Question: Have Ferrari closed the gap to Mercedes or are the World Champions going to dial up their engines even further?