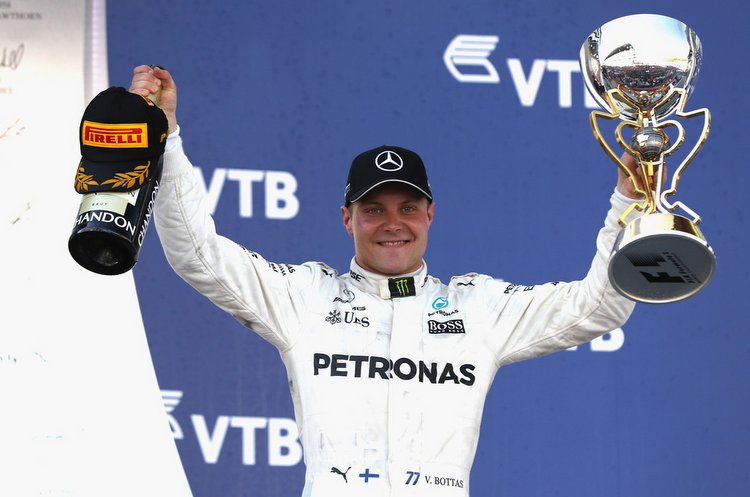 At a time when the two dominant figures in F1 have made winning a matter of course, Valtteri Bottas showed just how special a single victory can be.

82 races, 27 years, and four months under the Mercedes microscope – however you cut it, this has been a long time coming for Bottas. All that expectation was clearly weighing on the Finn, and now it’s been lifted. His two-word remark as he crossed the finish line perfectly summed it up: “F*ck me”.

That said, it wasn’t the most exciting of races. Bottas won it at the start and spent the rest of the afternoon hanging onto his lead like it was the last bottle of vodka.

The Ferrari was clearly the faster car once they’d all pitted for supersofts, and you have to wonder if Seb Vettel would’ve had him if he’d been pitted a few laps earlier. It’s hard to say given Sochi as a track provides less overtaking than the hallways at an old folks’ home, but I think it should give Mercedes some pause for what was in all honesty an unlikely victory.

Still, full credit to Bottas. Blowhards like myself have spent most of the last two weeks wondering just whether he was cut-out to leave Mercedes to victory, and now he’s shut us up – at least for the time being. It’ll be fascinating to see how he backs this up in Barcelona.

Equally fascinating was the all-round dismal weekend for Bottas’ teammate Lewis Hamilton, who arguably was the most “off his game” of any race in his Mercedes career.

Whether it was struggling with rear grip, brake temperature or what, he couldn’t touch the Ferraris, let alone his teammate. This is one he’ll probably want to forget, although that shouldn’t be hard when he’s probably got a hotel room full of Russian supermodels.

Anyway, onto Barcelona we go, and with it the first round of major updates to the cars. Sochi may not have been exactly a thriller, but it’s only served to heighten a 2017 season that is already shaping up to be a corker.