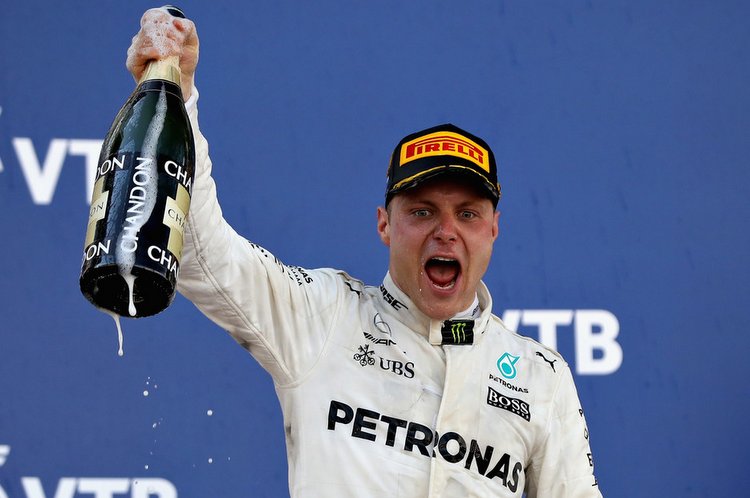 Mercedes driver Valtteri Bottas joined the greats of Formula 1 by winning the Russian Grand Prix, after making a superb start, controlling the race and then withstanding immense pressure from Ferrari’s Sebastian Vettel in the final dozen laps at Sochi Autodrom.

Bottas started third on the grid, managing to squeeze by both Ferraris in the drag race through the first curve and leading into the sharp Turn 2, with Vettel pole winner forced to follow him with Kimi Raikkonen slotting into third and Lewis Hamilton fourth in the other Mercedes.

But soon the safety car was deployed as Romain Grosjean and Jolyon Palmer collided as they battled for the same patch of tarmac, the Haas tagged the Renault and got sideways before ending up in the wall exiting Turn 1. The pair out immediately.

When the track was cleared and the field unleashed again, Bottas got strong re-start as he caught the Ferrari duo napping. Thereafter the Silver Arrows driver established a four to five second lead until he was pulled in for his first stop on lap 28.

Ferrari attacked at this point by keeping Vettel out for an extra six laps, and when the four times world champion emerged from the pits a rather mundane race came alive as the chase was on.

Vettel slashed what was a four seconds lead and with a couple of laps to go he was within DRS range of Bottas. It could be said that the Ferrari driver was not helped by the Williams of Felipe Massa who got in the way of a final charge on the last lap of the race.

But in the end, realistically, it was one or two laps too short for the Vettel as he never quite got a good chance to seriously attack Bottas who kept cool and composed, absorbed the pressure to take well deserved first grand prix victory.

The Finn said afterwards, “It’s been quite a while, more than 80 races, but worth the wait, well worth the learning curve. This strange opportunity came to me over the winter and I have to thank the team for making this possible. We need to keep pushing, keep finishing with both cars one and two. I’m very happy.”

On the occasion of his 81st F1 start, Bottas is the fifth driver from Finland to win a Formula 1 race and also the first Finnish winner since 2013.

Vettel and Ferrari will rue the fact that they lost a great chance to end Mercedes’ exclusive win streak at Sochi, with both cars starting a grand prix from the front row for the first time since 2008, but they were ambushed by Bottas and then fell agonisingly short of doing the business by the time the chequered flag waved.

Vettel was astoundingly quick late on during his first stint on the Pirelli ultra soft tyres, and one would have bet on him winning with ten or so laps to go. But in the end it was too much, too late for the Ferrari challenge to pay dividends. Second place was his reward as well as increasing his championship lead to 13 points after four rounds.

Raikkonen followed his teammate through in third, his first podium of the season and certainly a stronger showing all weekend by the veteran Finn.

He said on the podium, “Unfortunately we could only get third place but we’ll try for better next time. I have had a little bit of a rough start to the season – far from ideal – but this week has been a step forward,but we still only finished third. We’ll keep trying, keep improving, but all the small details have to be there to get the first place.”

After qualifying fourth, many expected Lewis Hamilton to bounce back in the race but the Silver Arrows driver, by his own admission, simply not on the pace and indeed failed to match Bottas’ all weekend. His plight on the day exacerbated by an over-heating car.

Hamilton told reporters , “Big congrats to Valtteri. He did an exceptional job all weekend,” he said. “I wish I could have backed him up in terms of points but I think i did the best I could. Once I got through the first couple of laps I was kind of stuck. Through the race I understood it. Speed-wise I know where it is and I will try to fix it for the next one.”

Best of the rest, albeit a minute adrift of the winner, was Red Bull’s Max Verstappen who had a lonely, hassle free run to claim fifth. The energy drinks outfit alarmingly well off the pace of the Ferrari and Mercedes.

In the other Red Bull, it was a DNF for Daniel Ricciardo after five laps after his rear brakes caught alight, forcing him to cruise around to his pit garage and retire the car.

The Force India duo of Sergio Perez and Esteban Ocon ended sixth and seventh respectively, another impressive and confidence boosting weekend for the Silverstone based outfit.

Felipe Massa finished ninth in the Williams, ahead of Carlos Sainz in the Toro Rosso who claimed the final point, while Williams rookie Lance Stroll – survived a first lap sin – finally finished a race.

It was another embarrassing day for McLaren with Fernando Alonso coming to a stop in the middle of the track on the formation lap, while teammate Stoffel Vandoorne soldiered around well off the pace to finish 14th – only better than the Sauber duo using year old Ferrari power units.

Prior to the start, Alonso was ruled out of the race on the formation lap. the Spaniard complained of a charge issues and though a resets were attempted he was forced to pull over and stop at the pit lane entrance.

When the race eventually got going Bottas roared past and into the lead ahead of the two Ferraris. Behind them Hamilton was trying to hold fourth from Red Bull’s Ricciardo. The pair banged wheels and Ricciardo was sent slightly wide. That allowed Verstappen to slip past his team-mate down the inside and also gave Williams’ Massa the opportunity to pass the Australian.

Further back, Stroll spun his Williams and dropped down the order but at the rear of the field there was a more dramatic incident as Renault’s Palmer collided with Haas’ Romain Grosjean. The Safety Car came out and the field bunch behind Bottas, Vettel and Räikkönen.

Ricciardo, meanwhile, was struggling in P7. He began to slow, reporting that he had a brake fire on the rear right. He was told to pit for checks but when he did the issue was deemed terminal and the Red Bull man was forced to retire from the race.

At the front, Bottas was beginning to exert a degree of control and by lap 13 the Finn has eked out a gap of 3.7 seconds to Vettel, with the German a further 3.7 seconds in front of Räikkönen. Hamilton was two seconds behind the Finn, while Verstappen was almost nine seconds further back in fifth place.

As the race headed for the 20 lap mark Hamilton’s engineer began to express concern about the car’s temperatures and the Briton was soon informed that the temperatures were at the limit. The Briton pushed on, however, and soon had 16 seconds in hand over fifth-placed Verstappen.

As the gap widened he asked to be kept informed about the temperature issue. At the front Bottas was no running five seconds clear of Vettel, with Räikkönen now almost 11 seconds off the lead.

The first pit stops occurred on lap 22, with Massa pitting from seventh for supersofts and rejoining in P10. Toro Rosso’s Carlos Sainz and Daniil Kvyat, as well as McLaren’s Stoffel Vandoorne, Haas’ Kevin Magnussen, who also served a five-second penalty for an earlier track limits infringement and Force India’s Esteban Ocon, who pitted on lap 26.

Race leader Bottas was the first of the front runners to pit, on lap 27, with the Finn taking on supersoft tyres. Räikkönen, complaining that his rears were gone, was the next in on lap 29, joined by Verstappen, while Hamilton made his stop for the red-banded Pirellis on lap 30.

Vettel extended his lead over Bottas to 20.6 seconds before his pit stop on lap 34 but despite the good work it wasn’t enough to overhaul the Finn and when the Ferrari rejoined he was 4.7 seconds behind the Mercedes driver.

Vettel began to close the gap however and when Bottas locked up at Turn 13 on lap 39, the gap narrowed to three seconds with Vettel lapping eight tenths quicker than the leader. Three laps later it was down to 1.5 seconds.

Bottas, though, was in control and as they weaved their way through traffic, the Finn edged ahead slightly. The gap ebbed and flowed then, but only ever by tenths of a second and after a final push over the last seven laps Bottas eventually crossed the line to take his first career F1 victory, scored in his 81st grand prix start.

Vettel’s second place means the German heads to the next round in Spain with a 13-point lead in the drivers’ standings over Hamilton who finished fourth behind Räikkönen. Vettel now has 86 points to Hamilton’s 73. Bottas’s first win leaves him third in the standings on 63 points, 14 clear of Räikkönen.

In the Constructors’ standings, the win and fourth place for Mercedes puts them at the head of the title race, though the defending champions have just a single point in hand over Ferrari.