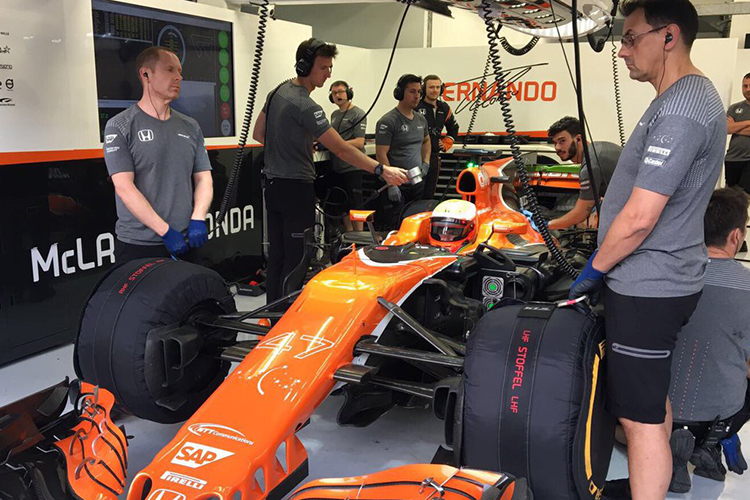 McLaren’s reliability problems continued in the Bahrain test as the Formula One team suffered another failure with one of their Honda engines.

Development driver Oliver Turvey had only completed two installation laps at the Sakhir circuit when his car ground to a halt, forcing mechanics to change the engine before he could return to action.

After the change, the team tweeted: ‘Big shout out to the crews for getting Oliver Turvey back out after today’s PU change stopped play.’

McLaren suffered with engine problems throughout the weekend’s Bahrain Grand Prix, which saw Stoffel Vandoorne fail to take the start of the race and Fernando Alonso pull out before the end.

Alonso revealed before the Bahrain race that he would not take part in the Monaco Grand Prix at the end of May in order to race a Honda-powered car for the Andretti Autosport team in the Indy 500 in the United States, his McLaren seat being filled for the Monte Carlo race by former team-mate Jenson Button.

Red Bull’s Daniel Ricciardo set the quickest time during the morning session of the Bahrain test ahead of the Mercedes of Lewis Hamilton, with Bahrain race winner Sebastian Vettel seventh in his Ferrari.