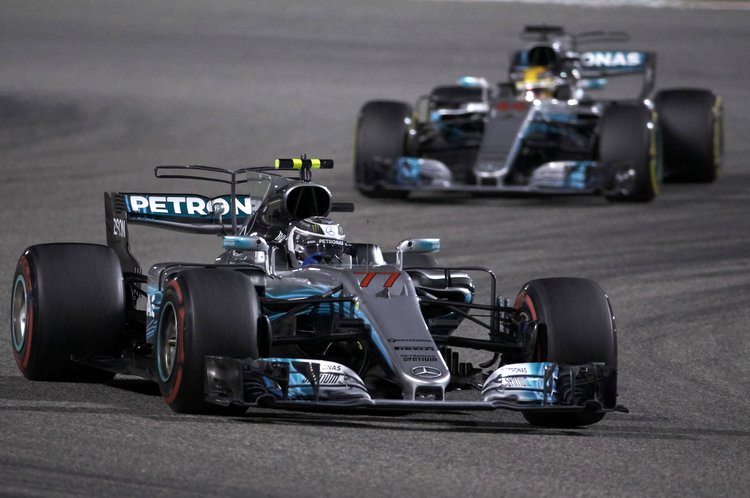 Formula 1 world champions Mercedes have indicated they may increasingly have to favour Lewis Hamilton over new team mate Valtteri Bottas to counter the threat posed by Ferrari’s Sebastian Vettel.

In practice, that is likely to mean the reluctant imposition of more of the so-called ‘team orders’ used in the Bahrain Grand Prix.

“We don’t like that at all,” team boss Toto Wolff told reporters after Bottas twice obeyed radio instructions to let the faster Hamilton through to chase eventual winner and championship leader Vettel.

“It’s not what we have done in the last couple of years but the situation is different now so it needs a proper analysis of what it means and where we are.”

Mercedes have never had a designated number one driver, and Wolff said the desire was to give both equal opportunity at the start of the race.

The team won all but two races last season but are no longer dominant in a championship that has for the past three years been an internal battle.

Vettel has now won two of three races and is seven points clear of Hamilton.

Finland’s Kimi Raikkonen, Vettel’s 2007 champion team mate who has yet to stand on the podium this season and not been on pole since 2008, slipped 34 points behind — half as many as the German.

Bottas, who joined Mercedes in January as replacement for now-retired world champion Nico Rosberg, is 23 adrift of his team mate.

Wolff said the situation at Ferrari had to be taken into consideration.

“That is the interesting question that we need to analyse at the moment and I don’t want to pre-empt what the consequence will be, or if there will be a consequence,” he added.

The disparity between the current Mercedes pairing is more marked than before, with Bottas yet to win a race and Hamilton surpassed only by Michael Schumacher in the all-time lists with 54 victories.

Bahrain was Bottas’s first career pole position, whereas Hamilton has 63 and could sail past Schumacher’s record of 68 later in the year.

The Finn is also still settling into his new surroundings, whereas Hamilton has been there since 2013 and is the sport’s biggest personality.

Hamilton had been on pole for six races in a row until Bottas broke the sequence in Bahrain and Wolff said Mercedes appeared to be still slightly ahead of Ferrari on single lap pace.

“In the race it’s pretty evenly matched I would say. So I think that’s going to be a close one for the next couple of races.”