Hamilton: I’m really happy it’s more than just the two of us 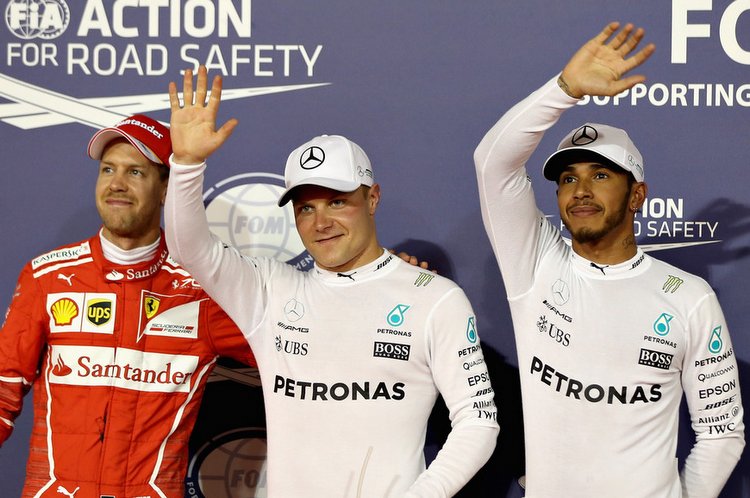 Lewis Hamilton saw his hopes of a seventh successive Formula 1 pole position disappear in Bahrain on Saturday but relished the prospect of at least a three-way title battle after Mercedes team mate Valtteri Bottas beat him to the top slot.

The Briton seemed genuinely pleased for the Finn, who arrived in January to replace now-retired world champion Nico Rosberg.

“I think it’s great how close it is between the teams because then it brings out the best in each driver,” said the triple world champion, whose best lap was a mere 0.023 of a second slower.

Ferrari’s Sebastian Vettel, the four-time champion who won the opening race in Australia and had been on the front row for the first two races, was third fastest after dominating Friday practice.

Vettel and Hamilton jointly lead the championship with 43 points each.

“When you feel like you’re at your best and you do a good job and you’re fighting against someone else who is doing just as good a job, it’s that much more exciting and the more drivers we have in the mix then the more tense it gets,” said Hamilton.

“I’m really happy it’s more than just the two of us. There’s going to be lots of ups and downs throughout the year but Valtteri’s definitely keeping me on my toes and I’m thoroughly happy for him today.”

That was much in evidence on Saturday, with Hamilton quick to congratulate Bottas before they joined Vettel in the news conference.

The Briton has 63 poles in a phenomenal career that has made him the second most successful driver of all-time, in terms of race wins if not titles, but he could remember his first as clearly as last weekend’s in China.

“He really deserved that lap and his first pole…I know how special it is to have your first pole position. It is just amazing,” said Hamilton.

“You dream of it as a kid and I know that he will be enjoying it and tomorrow could be his first Grand Prix win. Obviously, I will try my hardest to win the race but whichever the case, he’s going to have (victory) at some stage this year… because he’s getting stronger and stronger.”