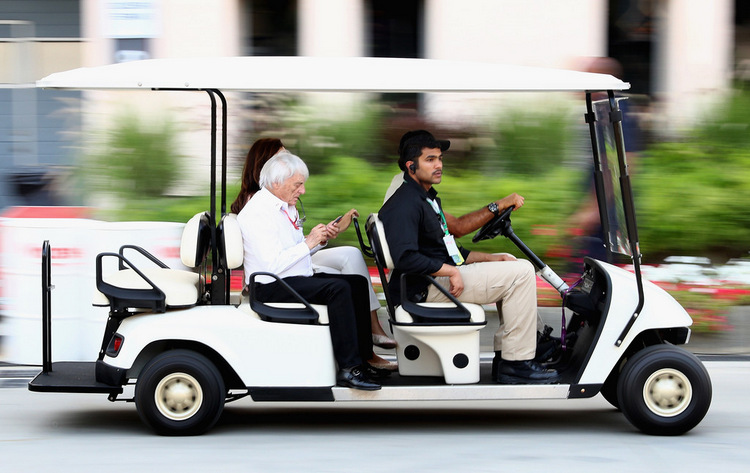 Formula 1 chairman emeritus Bernie Ecclestone was back in the paddock, but the once all powerful king of F1 was reduced to visiting his ‘mates’ in Bahrain, doing substantial mileage in a golf cart at his disposal.

Not long ago every decision made regarding F1 went through 86-year old Ecclestone, but now four months since he was ejected from the top spot thanks to the Liberty Media takeover with Chase Carey now at the helm.

Now it appears that Ecclestone’s has been reduced to that of a glorified gofer – in other words: giving the old man tasks that make him feel important

Ecclestone told reporters, “If there’s any help they want, I’m there helping. I spoke to Chase [Carey] this morning. He was asking me some things which I could help him with, which I did.”

As for his day-to-day role, Ecclestone revealed, “I’m in the office the same sort of time I always was until sometimes later than I used to be. There seem to be more emails coming in. Lots of people want to know if I can help in different ways, so I try to help.”

The former self-styled F1 supremo has yet to meet the sport’s new commercial director Sean Bratches but he has met up with Ross Brawn, “He popped in to see me for 10-15 minutes a week or 10 days ago. I knew Ross from the past obviously and I feel sorry for Chase being thrown in the deep end.”

“It’s like they bought Starbucks: everything’s done. Even how much milk you put in the coffee. It’s a case of keeping what’s done.”

“It doesn’t seem to me that they are doing things for money, which is good, whereas I was. Adding on top of it things that I didn’t do because it wasn’t earning money, like this social media.”

“I was running the company to try and make money for the shareholders. It doesn’t seem that’s the thing that’s driving them. [Chase] wants to get more happy spectators I think.”

“He’s in the lucky position that I wasn’t in. They don’t seem to have the same problem. They can do lots of things and not worry about the income,” mused Ecclestone.