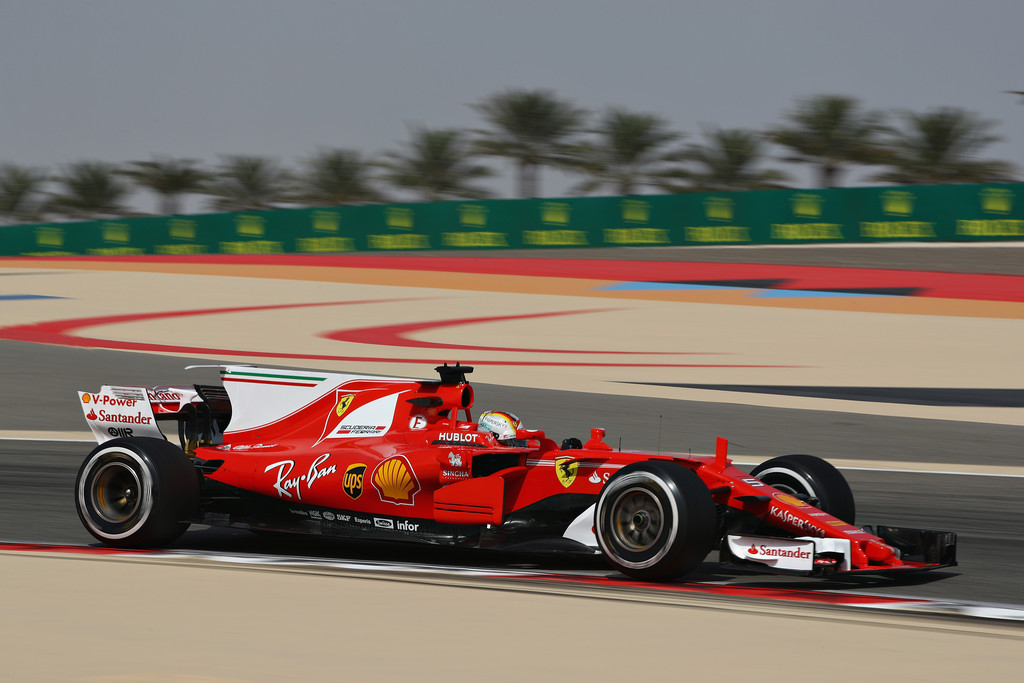 Ferrari’s Sebastian Vettel topped the time sheets as practice for the Bahrain Grand Prix got underway at the Sakhir Circuit, with the German finishing four tenths of a second clear of Red Bull Racing’s Daniel Ricciardo.

It wasn’t a wholly successful session for Ferrari, however, with Kimi Räikkönen stopping on track early in the session with smoke rising from the back of his car. It left the Italian squad book-ending the timing, with Räikkönen 20th and last on the sheet.

Vettel’s P1 time of 1:32.697, was set using Pirelli soft tyres, came with around half and hour left in a mid-afternoon session conducted in high temperatures.

The German was followed by Ricciardo whose best time was a 1:33.097 that left him exactly four tenths of a second adrift of the Ferrari man. Ricciardo’s lap was good enough, however, to put him almost half a second clear of team-mate Max Verstappen.

Mercedes, meanwhile, had a low-key start to the weekend with Lewis Hamilton tenth quickest and Valtteri Bottas down in 14th place. Hamilton briefly held sway with an early run on softs, set during the hottest part of the session, but gradually slipped down the order as the track improved.

Fourth place in the session went to Force India’s Sergio Pérez – best of the Mercedes powered brigade – who finished 1.398 seconds behind pacesetter Vettel. The Mexican was 0.151 of a second clear of Williams’ Felipe Massa while team-mate Lance Stroll was eight seven hundredths of second further back in sixth place.

Seventh place went to the second Force India of Esteban Ocon, while Fernando Alonso, who on Wednesday revealed that he is to contest this year’s Indianapolis 500 over competing at the Monaco Grand Prix, was eighth for McLaren. Romain Grosjean was ninth for Haas, ahead of Hamilton.

Räikkönen’s woes came on his seventh lap on track when he slowed and stopped just after Turn 13, with smoke pouring from the back of his car. Ferrari later reported that the Finn’s car had suffered an overheating issue with the turbo.

Räikkönen was not the only driver to be sidelined by an engine issue. McLaren’s Stoffel Vandoorne also stopped out on track when his engine cut out after 10 laps. He finished with the session’s 13th fastest time.

Elsewhere, Pascal Wehrlein made his first appearance on track since FP2 at the Australian Grand Prix after which he complained of a lack of fitness following a pre-season crash at the Race of Champions. On his return to the cockpit with Sauber he finished in 18th place, seven hundredths of a second behind team-mate Marcus Ericsson.