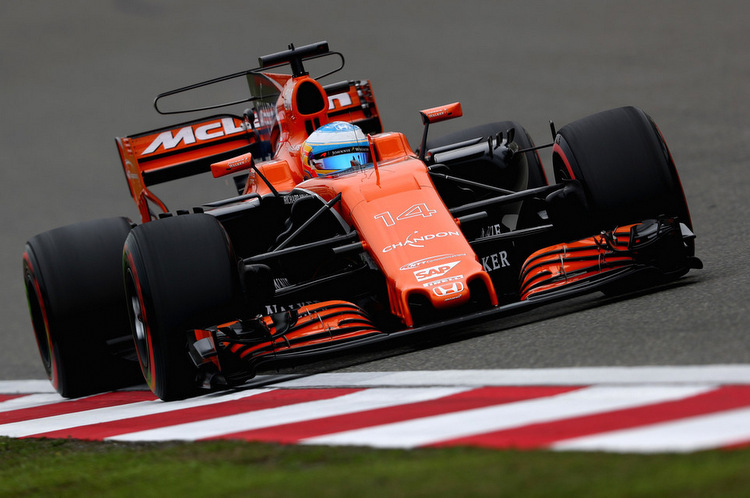 The back-to-back nature of the Chinese and Bahrain Grands Prix means the team has been operating at two different racetracks simultaneously.

While the race team was competing in China, a crew of three people were setting up in Bahrain, preparing the pit garage and the sea freight. Twelve engineers then flew overnight on Sunday from Shanghai to Manama, with the remaining 45 members of the race team travelling between the two countries on Monday

Surprising fact Bahrain is an archipelago of 33 islands. The largest, on which the Bahrain International Circuit is located, is 55km long and 18km wide

It’s going to be hot. The daytime high over the weekend is expected to be 31 degrees, although it will be cooler during the race because the temperature drops rapidly when the sun goes down.

Fernando Alonso: “I’m looking forward to going back to Bahrain, especially as I missed last year’s race – I have good memories from my three victories there, and racing in twilight is always a fun experience. The Bahrain Grand Prix is always a pretty long race, so our first priority is to ensure we have reliability against the heat and harsh conditions of the desert before we can start thinking about performance. On the performance side, before retiring the car in Shanghai I was running in a very promising position, and our pace was much stronger than anticipated, so I’ll be pleased if we can have some more good surprises in Bahrain! It will be another challenging race for us; the long straights don’t make it easy and there’s a lot for the engineers to work on. Brake wear and fuel consumption is high, and set-up is tricky as the track temperatures change a lot during the weekend, as we race later into the evening compared to the usual schedule. I’m pushing hard to get the absolute maximum out of our package every time I leave the garage, and in Bahrain I’ll approach the weekend in exactly the same way.”

Stoffel Vandoorne: “I have lots of good memories from the Bahrain Grand Prix weekend in 2016. We’re a year on now, I’m a full-time McLaren-Honda driver, and I’ve already gained a lot more experience in the past 12 months, so of course my aim is to work hard and improve every time I arrive at a grand prix. This year will be difficult for us, but we’ll be racing hard as always. The most important thing for me is mileage, and the weather will surely be better in Bahrain than it was in Shanghai, so I’m hoping to do as many laps as possible over the weekend. It helps that I know this track well and I won there twice in 2015 in GP2, so I’m already comfortable with the layout and therefore it’s a case of building on what I already know. We were always expecting a difficult weekend in China, and I don’t know if it will get a lot better in Bahrain – it’s only one week later and there’s obviously a limit to how many changes we can apply in that time, but we’ll do our best as usual. The car is definitely improving and both Fernando and I feel confident and competitive, especially in the corners, so we’ll have to wait and see what’s possible at this track.”

Eric Boullier, Mclaren-Honda Racing Director: “Of the dozen Bahrain Grands Prix that have been held since the event’s inception in 2004, McLaren has surprisingly never managed to win a single one. By contrast, Fernando has won the race no fewer than three times, a victory total that eclipses the efforts of any other driver [Lewis Hamilton, Sebastian Vettel and Felipe Massa have all won it twice]. Sad to say, however, Fernando is extremely unlikely to add to his impressive victory tally next weekend, and neither will McLaren break its Bahrain duck on Sunday. But the weather will be much better than we suffered in Shanghai, where it was dull, wet and chilly, and as a result we can expect a lot more running than we managed last weekend. The race will mark the one-year anniversary of Stoffel’s first Grand Prix, which was a highly creditable one. He duly scored a point on his Formula 1 debut. Both he and Fernando will be striving for points finishes again next weekend – and, although we never make rash promises or predictions, we hope their efforts will be successful. After all, Bahrain has been a happy hunting ground for Stoffel in GP2; indeed he won well there on his series debut three years ago. Last but far from least, Bahrain is one of McLaren-Honda’s three home Grands Prix, Silverstone and Suzuka being the other two. As such, it would be fitting it we could score our first points of the year there, and you can be well sure that we’ll be doing our best to do just that.”

Yusuke Hasegawa, Honda R&D Co. Ltd Head Of F1 Project & Executive Chief Engineer: “After a wet and cold weekend in China, we are now heading off to Bahrain where we expect the conditions to be the complete opposite, dry and hot. The race result in China was a big disappointment; despite the result, however, we took away a number of positives and, up until the retirements, we had an encouraging race in tricky conditions. I have more confidence in the progress of our PU reliability after the first two grands prix of the season, and I am now looking forward to seeing our performance in Bahrain, where hopefully we can continue to build on our momentum at what is something of a home race for McLaren-Honda. The hot conditions and two long front and back straights of the track will be strenuous on the power units, so we are not expecting this weekend to be easy for us. We will concentrate to find the best set-up during practice together with McLaren, as well as working on ensuring our reliability. We hope to show fans a good race here and we’ll make our best effort to collect some points.”