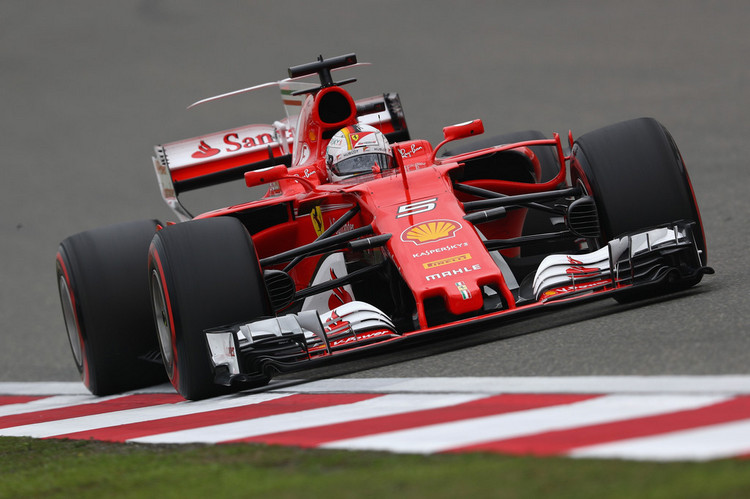 Ferrari’s Sebastian Vettel and Kimi Raikkonen set the two quickest lap times in practice at the Chinese Grand Prix on Saturday, as the rain and fog finally cleared to allow the drivers on the track during a busy pre-qualifying session.

Vettel’s time of 1 minute, 33.336 was just a second slower than the lap record at the track, set by Michael Schumacher in 2004. It was also more than 2 seconds faster than last year’s quickest qualifying time in Shanghai, set by the now-retired Nico Rosberg.

Vettel just barely edged his teammate, Raikkonen, who set a time of 1:33.389. The fast practice laps provide further evidence that Ferrari’s pace is much improved this year, allowing the scarlet cars to compete with the long-dominant Mercedes team.

Mercedes’ Valtteri Bottas was nearly 0.4 seconds off the pace, posting a lap time of 1:33.707. His teammate, Lewis Hamilton, went wide on a hairpin turn on his final flying lap, ending up with the fourth-fastest time of the session at 1:33.879.

The gulf between the top two teams and the rest of the field was significant. Williams’ Felipe Massa was nearly 0.9 seconds behind Hamilton in fifth place, followed by the Red Bull cars of Max Verstappen and Daniel Ricciardo.

The teams didn’t waste any time in the hour-long session after Friday’s practice runs were nearly completed wiped out due to poor visibility from rain, fog and smog. All the drivers made quick exits from the garage to allow ample time to test their full array of tires before qualifying later in the day.

The poor visibility on Friday grounded the circuit’s medical helicopter, limiting practice to about 20 minutes in the morning. Many drivers failed to set a lap time, including Hamilton, Vettel and Raikkonen.

The dreary start to the Chinese GP prompted speculation the schedule might be adjusted to allow more practice time or move the race ahead a day to avoid the rain forecast for Sunday. The FIA, however, ruled out any change.

Note – Practice 2 was cancelled due to poor weather conditions.