Mercedes versus Ferrari it’s game on! 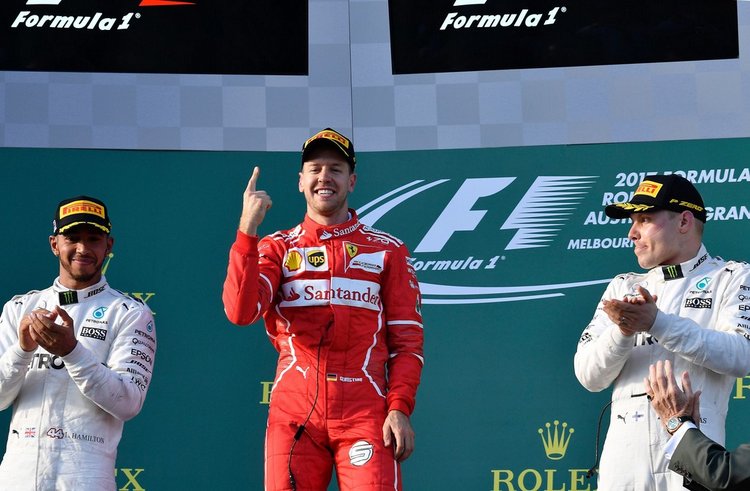 With Sebastian Vettel ascending the top of the podium in his red Ferrari race suit, the new regulations for Formula One cars seemingly needed only one Grand Prix to produce one of the desired effects.

Vettel’s drought-breaking win for Ferrari was widely celebrated, with Mercedes drivers Lewis Hamilton and Valtteri Bottas having to settle for second and third. Mercedes won 19 of the 21 F1 GPs in 2016, and Red Bull collected the other two titles.

Ferrari’s first win in Australia since 2007 has already given 2017 a different complexion. Kimi Raikkonen, who won for Ferrari a decade before, placed fourth on Sunday as Ferrari earned a four-point cushion over Mercedes in the constructors’ standings after the first of 20 rounds.

It sets up a genuine contest this season between two of the dominant drivers of the past decade – three-time world champion Hamilton against Vettel, who won four straight drivers’ titles with Red Bull from 2010-13.

“He’s proven to be one of the quickest drivers on the grid and for sure I would love to have a close battle,” Vettel said of Hamilton. “Obviously right now it looks like we have equal machinery.

“I hope it stays that way and then we will see how it turns out – but it’s obviously a lot of fun to race for victories.”

Hamilton had a tense relationship with Nico Rosberg in their duel for dominance at Mercedes, which has dominated the last three seasons. Hamilton won back-to-back drivers’ titles in 2014 and ’15, and narrowly lost last year to Rosberg, who then retired.

That made room for Bottas, and the personnel change means Hamilton now expects to look beyond the Mercedes garages for his main rival.

“Incredible amount of respect for Sebastian and what he’s achieved in his career,” Hamilton said. “It’s been a privilege to be racing in an era with him and now finally at a period of time when we can actually have a real race.

“I wish we could race a lot closer in the cars that we have today but still I think the fact that we are similar pace-wise, it’s going to be a very, very hard slog this season.”

Max Verstappen was fifth for Red Bull, which only got one car to the finish and struggled to match the pace of Ferrari and Mercedes, which both notched lap records at Albert Park in practice and qualifying. Local hope Daniel Ricciardo finished third in the championship last year but his turbulent weekend ended in mechanical failure on lap 28 of a race he had to belatedly start from pit lane.

With regulations designed to make the 2017 F1 cars faster and increase the competition at the front of the grid – wider tires, greater aerodynamics, bigger fuel loads and increased downforce – Vettel proved Ferrari’s extra pace in pre-season testing was genuine as he picked up the team’s first GP win since his last victory in Singapore in September, 2015.

Vettel had some luck when Hamilton – after starting on pole position for a record-equaling sixth time in Australia – pitted early to change tires and then got stuck in traffic behind Verstappen and couldn’t overtake.

“Grazie mille. You can’t say much more,” Vettel said to the Ferrari crew and fans after finishing in 1 hour, 24 minutes and 11.672 seconds, almost 10 seconds clear of Hamilton. It was Ferrari’s first win in Australia since Raikkonen took the title in 2007. In the last two seasons the driver who has won in Australia to go on to win the championship.

The new rules didn’t have a positive spin for all the previous champions in the field. Fernando Alonso retired on the 50th of 57 laps to continue his unsuccessful run at McLaren. He was among the seven drivers who failed to finish. Lance Stroll, the 18-year-old Canadian rookie, ended an eventful first F1 weekend two-thirds of the way through Sunday’s GP.

His teammate Felipe Massa earned points for Williams, though, with a sixth-place finish. Force India teammates Sergio Perez and Esteban Ocon were 7th and 10th in their pink cars and finished either side of Toro Rosso drivers Carlos Sainz and Daniil Kvyat.

Ferrari team principal Maurizio Arrivabene said when the 2017 edition SF70H was launched, “we referred to it as ‘Our Ferrari.'”

“Indeed today’s win reflects all the effort and hard work put in over the past few months,” Arrivabene said. “This is only the first race of the championship, though. There are still 19 to go and we must maintain a high level of concentration at every Grand Prix, avoiding distractions and, already as from today, we are looking ahead to the next Grand Prix in China.”

Toto Wolff, the head of Mercedes-Benz Motorsport, was visibly frustrated during Sunday’s race, slamming his fist on a table twice as he watched Hamilton, who started on pole for a record-equaling sixth time in Australia, get caught up in traffic and losing ground to Vettel.

“Sebastian and Ferrari were well-deserved winners,” Wolff said. Strategically, “Ferrari played it very well – and they had the quicker car.”

Mercedes has won the last three championships and the clear bulk of the GP titles across that period, a dominance that had some observers concerned it wasn’t good for the sport.

“Now, it is about accepting that Ferrari beat us,” Wolff said. “But we will leave no stone unturned in order to win.