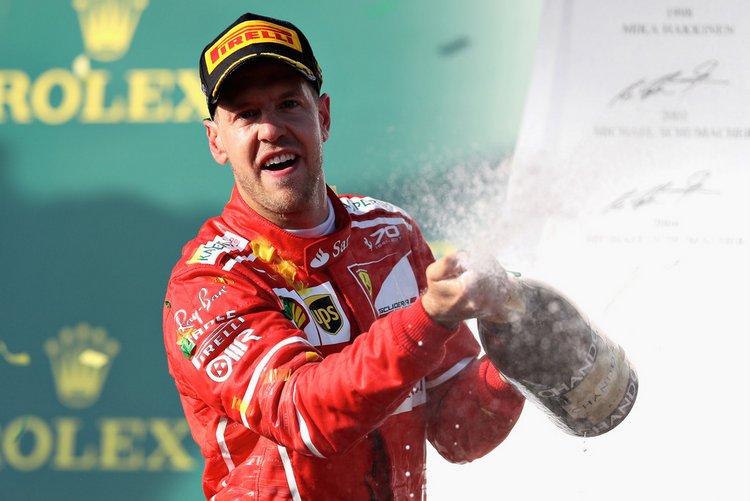 Ferrari driver Sebastian Vettel won the Australian Grand Prix,  the opening round of the 2017 Formula 1 World Championship, in style and in the process shocked Mercedes whose Lewis Hamilton qualified on pole and led the early stages of the race.

Vettel’s victory vindicates Ferrari’s winter efforts and say-very-little methods, which attracted the wrath of Italian media, while returning a driver in red to the top step of the podium for the first time since the 2015 Singapore Grand Prix.

The manner in which Vettel won the race in Melbourne will also be a big boost for all at Maranello. Early on he latched on to the back of Hamilton, who managed a good start, and the Ferrari was always within a couple of seconds of the leader. Always ready to pounce.

Delighted, Vettel, speaking to MC Mark Webber on the podium: “Unbelievable. It is a fantastic grand prix. It was quite mad in a positive way with the people running on the track going wild with the Ferrari flags.”

“There is a long way to go, but we are just over the moon at the moment. I was not entirely happy with my start, there was a bit of wheel-slip, but I was trying to keep the pressure on to give the message that we are here to fight.”

“There was a bit of luck that Lewis came out in traffic. You can push these cars until the end. The tyres still degrade but you can still attack all the way,” he added on the occasion of his 43rd grand prix victory.

In contrast, Hamilton was never really content, complaining about of lack of grip with the Ferrari looming in his mirrors.

He asked Mercedes to pit him from the lead on lap 17. But it was too early, crucially the pit appeared not to do the maths properly, or whatever, as the Silver Arrows emerged from the pits behind the Red Bull of Max Verstappen.

And that was that, as Hamilton  could not get by the Dutchman and cost him time, and perhaps the race too.

This played into Vettel’s hands. The early pressure had paid off. The German stayed out reeled out a series of impressive and consistent laps.

Seven laps after Hamilton’s stop, Vettel peeled into the pits and when he emerged was well up the road and comfortably in the lead where he remained until the chequered flag waved, increasing his lead as Hamilton’s challenge fizzled out and thereafter never looked like challenging Vettel.

On the podium Hamilton appeared gracious and pleased that at last he may have a battle on his hands with someone other than his teammate, even he knowss that victory for Ferrari is always a good thing for Formula 1.

He said on the podium: “A big congratulations to Ferrari and Sebastian, we struggled with the tyres and had to stop early as I was suffering with grip, but it is great to see everyone out here.”

Valtteri Bottas followed his teammate home in  third, the Finn enjoyed a solid, if unspectacular race, and will no doubt be glad to have finished on the podium in his debut for Mercedes. He closed in on Hamilton in the late stages,  but appeared to hold station until the end of the race.

Bottas said: “First race with the team, thanks everyone. We have worked so hard to be ready. Everything went nice and smoothly but the red cars too quick for us today. We can improve from here.”

Fourth went to Kimi Raikkonen in the other Ferrari, the veteran had a subdued race and was no match for Vettel. In the end he crossed the line 22 seconds adrift of his teammate.

Verstappen finished fifth, but it was quite clear that the Red Bull RB13 around the wall-lined and tight confines of Albert Park was not a match for the pace setters.

It was a huge disappointment for teammate, Daniel Ricciardo who spun out and damaged his car in qualifying on Saturday. Technical issues kept him in the pits for two laps after the field was released as his crew tried to sort out the issue.

He emerged to big cheers from the crowd, but his race was over before it began. He retired the car on lap 25 long before the race ended.

The big smiling Aussie was disappointed: “The most frustrating thing was for all these things to happen at home,” he said. “I don’t put it down to anything other than the mistake I made in qualifying. We had an issue in the warm up lap and a separate issue in the race. Just bad luck I guess.”

“I can still win 19 races, that’s the plan. I think the car is better than we are showing but it is a bit of a puzzle we are trying to work out. I hope we can find the pace soon enough,” added Ricciardo.

There was drama even before the start as on his lap to grid home favourite Ricciardo’s Red Bull slowed dramatically. The Australian’s car had been repaired overnight following his crash in qualifying and his team had performed a gearbox change, which dropped him to 15th on the grid.

As he circled to take that spot he reported that the car had lost power and then stuck in sixth gear. It was recovered to the garage and his crew then began to work frantically to get the car repaired so that he could start from the pit lane.

They were afforded a little more time when there appeared to be confusion about grid slots following Ricciardo’s stoppage and the start had to be aborted.

After another formation lap the race finally got underway and Hamilton held his advantage, taking P1 through Turn One. He was followed by Vettel, Bottas, Kimi Raikkonen and Max Verstappen.

As the field flowed across the line at the end of the first lap, Ricciardo’s car was finally fired up and he joined the action – two laps down.

At the front, Hamilton attempted to stretch a small gap to Vettel but the Ferrari driver responded and over the course of the first 15 laps the deficit stayed hovered around 1.5 seconds.

Bottas held third, some six seconds behind the Finn, while Verstappen was fifth ahead of Felipe Massa, Romain Grosjean, Carlos Sainz, Sergio Perez and Daniil Kvyat.

Grosjean’s stint in the top 10 was coming to an end though. On lap 15 smoke began to billow from his Haas’ engine cover and he quickly steered towards the pitlane where he retired from the race.

Hamilton made his first stop on lap 17 and took on soft tyres. He emerged in P5 behind Verstappen. Thus, Vettel assumed the lead.

Soon after, Hamilton was told that it was “race critical’” that he pass Verstappen but the Briton was quick to point out that there was no way past the Dutchman.

As Hamilton’s pace dropped behind the slower Red Bull, Vettel powered away at the front and when the German made his first stop, for soft tyres, on lap 23 he emerged ahead of both Verstappen and Hamilton, the Ferrari driver quickly building a six seconds advantage.

Later, Hamilton said he called for the early stop because of excessive tyre wear and that he had simply ‘run out of grip’.

Elsewhere, Ricciardo’s frustrating afternoon came to a close when he suddenly lost power on lap 29 and ground to a halt at Turn 3.

The Red Bull teenager was making headway, though, and on lap 41 he turned reduced the gap to Raikkonen to three seconds. A lap later he clawed another eight tenths of a second back.

It looked like there might be a late-race duel on the cards, but as his supersoft tyres faded it was as near as Verstappen got. By lap his pace began to drop and the gap to Raikkonen drifted to two seconds by the end of the race.

Further back Fernando Alonso was heading for a P10 finish and McLaren’s first points of the season. However with just a handful of laps remaining the Spaniard was in trouble. First with Ocon and Hulkenberg swarming all over the back of his McLaren and then with a mechanical issue that was making his car pull to the right.

Ocon swiftly pounced and took the final points position for Force India. Alonso steered to the pits to retire from the race with a failed suspension.

At the front, Hamilton was offering no threat to Vettel and the order remained stable, with Bottas third ahead of Raikkonen and Verstappen now settled in fifth place.

Vettel took the flag for his and Ferrari’s first win since Singapore in 2015, followed by Hamilton and Bottas. Raikkonen took fourth ahead of Verstappen.

Felipe Massa was sixth for Williams with Perez scoring solid points for Force India with an impressive seventh place. It was a good day too for Toro Rosso, with Carlos Sainz eighth ahead of team-mate Daniil Kvyat. The final points position was taken by Ocon.

Just three other drivers finished the race, with Nico Hulkenberg 11th for Renault and Antonio Giovinazzi, a last minute replacement for injured Pascal Wehrlein, ending a credible 12th for Sauber on his Formula 1 debut.

Thirteenth place went to McLaren’s Stoffel Vandoorne. The weekend’s other rookie, Lance Stroll retired from the race at two-thirds distance.