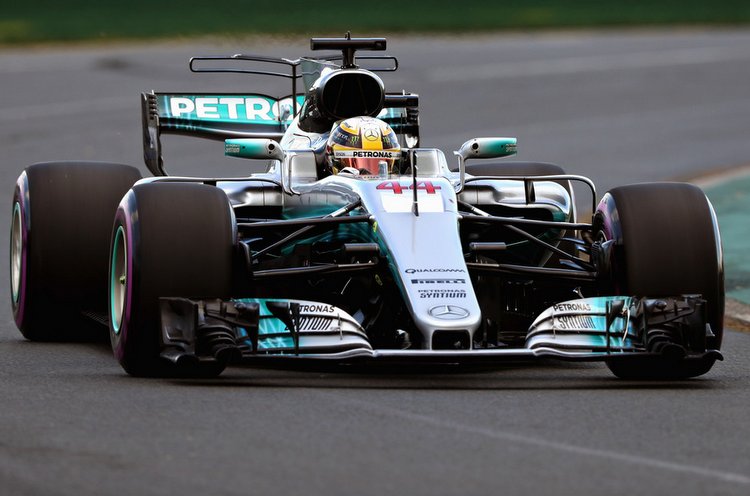 Mercedes driver Lewis Hamilton signaled his intent as he powered to pole position for the season opening Australian Grand Prix, ending qualifying with a superb lap which was a quarter of a second up on next best Sebastian Vettel in the Ferrari.

Under heavy clouds threatening rain and occasionally spitting a drop or two, Hamilton powered around Albert Park in a best time of 1:22.188 which was good enough for the top spot start and 0.268 of a second up on Vettel’s best effort.

Hamilton summed up his afternoon, “It has been a fantastic weekend so far. It feels like only yesterday I came here and had my first race here in 2007. Such an incredible journey. I am really proud of my team, the guys have worked so hard to make the car what it is today.”

“Valtteri has done a great job and it is great for Mercedes. It is close between us all and it will be a tight race,” added the triple F1 World Champion.

For Ferrari it will be a relief that they are in the mix, they have made giant strides in closing the gap during the winter, Vettel was a happy man, “We have a good car, we are working well as a team and things are improving. ”

“We had a mixed day yesterday but the confidence in the car was there from testing and we showed that today. I would have loved it but I don’t think pole was up for grabs. I think we can do something in the race tomorrow,” ventured the four time F1 World Champion.

Hamilton’s new teammate Valtteri Bottas, who is still dialing himself into the team, was quickest in Q2 but a scrappy final lap in Q3 resulted in the third best time.

Bottas said, “Third is not ideal. In general I am not happy for the result but I am proud of what the team has done with this car. It is really nice to see the work has paid off and we are fighting at the front. It seems close this year but me personally I did not get any perfect laps in. Tomorrow is the day that matters. Our starts have been quite strong in practice.”

Next up was Kimi Raikkonen, over half a second down on Vettel, nevertheless indicating that the battle for the big prize on Sunday, in Melbourne, will be between the Silver Arrows and the Reds.

It was a day of disappointment for Red Bull and local hero Daniel Ricciardo who crashed out of Q3 while on a flyer, while Max Verstappen was best of the rest, behind the Mercedes’ and Ferraris, albeit 1.3 seconds off the pole lap pace.

Much was expected from the energy drinks outfit but they lacked fizz when it mattered and early indications are that they have dropped significantly off the pace setters, or simply the nuances of Albert Park do not suit the RB13.

Ricciardo said after his return to the pits, “Physically I am OK but emotionally it’s tough. At least it wasn’t in Q1. The lap in Q3 was a little messy, the turn caught me out, caught me by surprise. There was not a way catching that and saving it.”

Romain Grosjean impressed in the Haas, qualifying sixth and comprehensively out performing his new teammate Kevin Magnussen, who failed to make it beyond Q3 and had to settle for 17th on the grid for his debut with the American team.

Williams veteran Felipe Massa was seventh fastest in a somewhat subdued session for the Brazilian. His rookie teammate Lance Stroll could only manage 19th after slamming the wall a few hours earlier in FP3. It was a rush job by the Williams crew to patch up the damaged FW40 and in fairness the teenager’s session was compromised before it began.

The Toro Rosso pair did a solid job with Carlos Sainz and Daniil Kvyat set to start from eighth and ninth respectively.

Ricciardo not setting a lap time before his qualy ending incident, set to start 10th. But a possible engine change may relegate the Australian to the wrong end of the grid.

No doubt one of the heroes of the day was Antonio Giovinazzi who, in the early morning, was hastily drafted in to replace unfit Pascal Wehrlein in the Sauber. The Italian managed only 18 laps in FP3, before being thrown into the deep end of qualifying around a notoriously tricky circuit he had never driven on before.

However the Ferrari reserve seized the moment impressively to qualify 16th, matching his teammate Marcus Ericsson in the sister car, but only an error on his final lap kept him out of Q2. The Italian announced his arrival in the best way possible.

More was expected from the Force India duo, but the boys pink missed out on Q3, with Sergio Perez ending the session 11th and his new teammate Esteban Ocon 14th fastest.

McLaren appeared to have a good Friday, but in qualifying they were plagued with niggles that frustrated their drivers Fernando Alonso and Stoffel Vandoorne. The pair were at the wrong end of the timing screens ending 13th and 18th respectively.

Jolyon Palmer was slowest in his Renault, the Englishman complaining that the car – rebuilt after he wrecked it 24 hours earlier – was undrivable. His teammate Nico Hulkenberg was 12th in his first qualifying for the French team.

Final word to the man who will start the 2017 season opener from pole position, “Tomorrow is about putting in all the work that went on over winter. I will make sure I get a good night’s sleep and come back stronger than ever.”