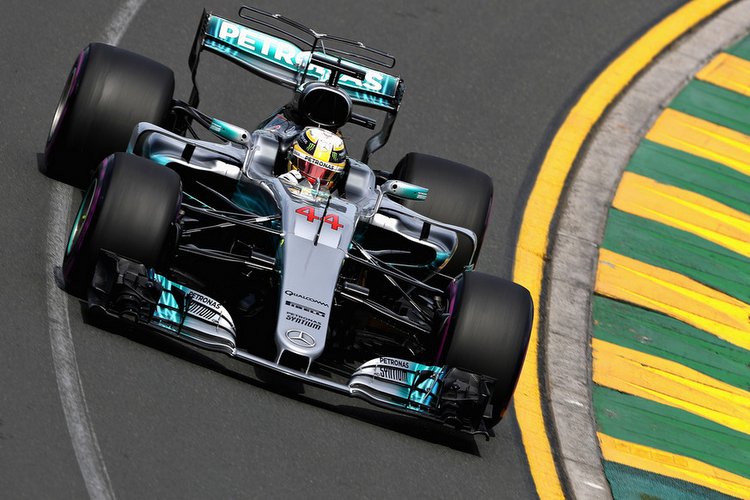 Lewis Hamilton topped the timesheets ahead of new Mercedes team mate Valtteri Bottas in the first free practise session at the Australian Grand Prix, going over five seconds faster than he did at the same venue

Hamilton clocked a flying lap of 1:24.220 on a warm, at Albert Park, more than half a second faster than the Finn in a largely incident-free session.

Red Bull drivers Dan Ricciardo and Max Verstappen were third and fourth fastest respectively, with the Ferraris rounding out the top six. The Reds, who are expected to have closed the gap to the Silver Arrows, were one second adrift of the top top time.

However, Hamilton and Bottas posted their fastest laps on the quicker Pirelli ultra-soft tyres, while other drivers stuck with the super softs, leaving the true pace of the cars unclear.

More definitive was the overall speed of the new cars, many of which were over four seconds faster per lap compared to the corresponding practise at last year’s race.

Hamilton’s time was less than four-tenths of a second shy of the qualifying lap of 1:23.837 that put him on pole position at Albert Park last year.

Three-times F1 champion Hamilton would have been pleased to put down an early marker ahead of his new team mate Bottas, who replaced retired champion Nico Rosberg.

Ferrari set the pace during winter testing but the Scuderia had a subdued session, with Raikkonen edging four-times champion Sebastian Vettel with the fifth fastest lap.

Felipe Massa was seventh fastest for Williams ahead of Haas’s Romain Grosjean.

Fernando Alonso was 14th on the time-sheet for Honda-powered McLaren, with his team mate Stoffel Vandoorne at the bottom, underscoring the challenge for the Woking-based outfit after their problems during winter testing.

Briton Jolyon Palmer was 19th out of the 20 cars, his session cut short due to a seal problem with his Renault.

Canadian rookie Lance Stroll was 13th for Williams and got through the session unscathed after a number of incidents during winter testing.