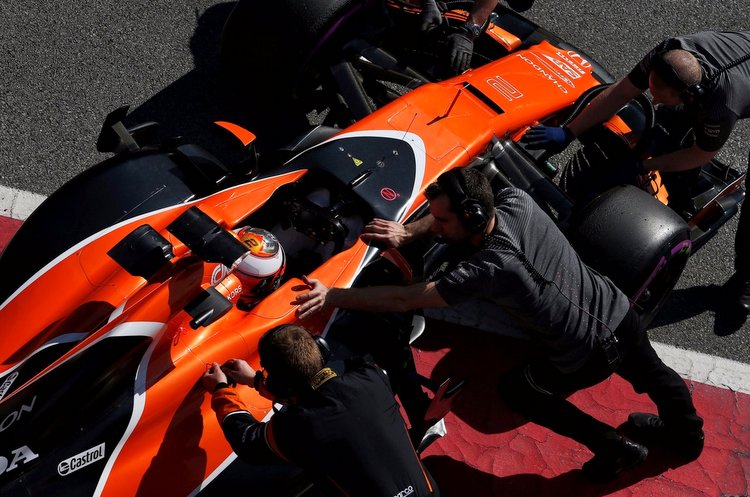 Martin Brundle, who is one of the better connected pundits in the Formula 1 and as a former McLaren driver probably has a better inside line on his former team than most, believes that the Woking outfit cannot simply ditch Honda and pursue an alternative engine supplier.

Brundle said, “They can’t leave Honda unless Honda pull out and leave them a fat cheque like they did Brawn. But they are very much integrated technically, financially and they have to work through it.”

The testing woes of McLaren and Honda are well documented, while the aftermath of this has F1 media speculating that a split is looming, but at the same time there is the issue of a reported $100-million that McLaren would forfeit should they initiate a split with Honda.

It’s a something of a double edged sword for the sport’s second most successful team, because a third year at the wrong end of the grid is equally unacceptable and a solution is needed as soon as possible.

Brundle explained, “I do get the impression that it’s not an easy fix and they might take some pain for a few races before they can sort it out. McLaren should be bothering Red Bull let alone midfield. So we all need McLaren to be good.”

And added, “I’m not getting anything out the team that suggest it’s anything other than grim at the moment. There are some big fires to put out.”

As for the new rules which have beefed up the current era Formula 1 cars, extra aero and fatter tyres have made the cars almost five seconds per lap quicker around Circuit de Catalunya during preseason testing, Brundle expects overtaking to be at a premium and far more challenging.

“The objectives were to make the cars go faster and that’s been achieved hasn’t it? Whether it makes for better racing remains to be seen. Let’s hope so,’ Brundle said.

“Verstappen was saying it seemed like the same to him [following other cars]. Barcelona is horrendous for that anyway so I think until you get to different tracks I don’t think we will know.”

“But common sense tells me if the car in front is making more downforce and more drag and you have an ever bigger front wing going into it, it’s probably going to affect you. But we will see. The cars are a bit draggy in a straight line anyway so we might see a bit more overtaking.”

“When we see overtakes this year I think they will be proper chess moves,” predicted Sky TV Brundle.