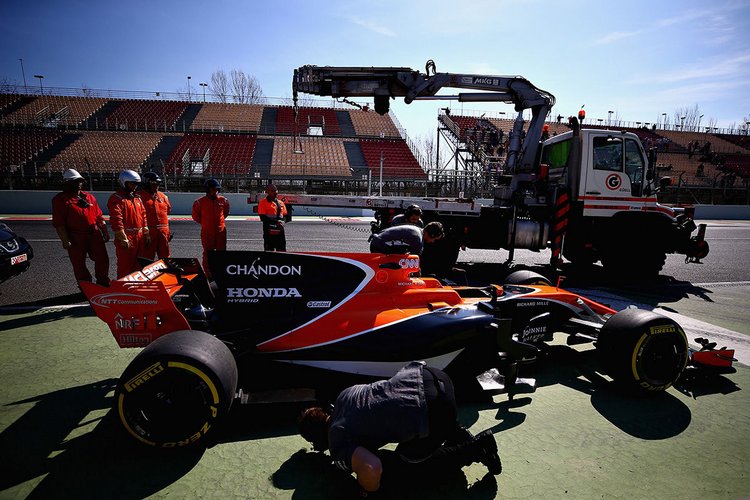 Fernando Alonso, as frustrated as any double Formula One world champion would be in a slow and unreliable car, summed up McLaren’s testing woes in terms guaranteed to make Honda executives wince.

“We have only one problem, and that is the power unit. There is no reliability and there is no power,” the Spaniard told reporters.

Alonso did not stop there, quoted by his home media as saying he was fully motivated, the chassis felt good and everyone in the team was ready to win “apart from Honda”.

“I am driving at my best…I feel the best driver out there, I just need an engine that can run as quick as the others on the straights,” he said.

Once again, former champions McLaren are heading to the Australian season-opener with a distinct whiff of crisis around them despite their best efforts to rebrand, regroup and put the immediate past at arms’ length.

Media reports in Britain and Spain have suggested McLaren, who have publicly stated their commitment to Honda, could trigger break clauses and split at the end of the year unless there is a major improvement.

The look has changed, highly-rated Belgian rookie Stoffel Vandoorne has taken the seat vacated by 2009 champion Jenson Button, and the new black and orange car was launched with some optimism.

Testing in Barcelona took away a lot of the feelgood factor, however, with both drivers struggling to get laps under their belts due to failing power units.

“Clearly we have problems,” said Brown last week. “I think Melbourne is going to be tough. I would be surprised if we are where we need to be and want to be by Melbourne. So it’s going to be a tough start to the year.”

McLaren, who have not won a race since 2012 but remain the sport’s second most successful team in terms of grand prix wins, finished sixth overall last season.

That was a big improvement on the 2015 slump to ninth in the first year of their new partnership with the Japanese manufacturer, but still a long way off where they want to be.

In the late 1980s and early 1990s, with team mates Ayrton Senna and Alain Prost fighting famous battles, Honda and McLaren were dominant but hopes of rekindling that magic are fading fast.

The Woking-based team are looking for a title sponsor, having been without one since Vodafone left in 2012, and success on the track always helps.

Alonso could walk away at the end of the season, even if he says that his future remains a discussion for the later part of the year.

“It´s only winter testing. I remember 2014, Red Bull were doing like seven laps in winter testing and won two or three grands prix that year,” he said.

“So let´s say that the season is long enough that you can have time to react. But right now there is no secret. We cannot pretend that we are happy and everything is going OK,” he added.

Big Question: What now for McLaren?