Haas: Definitely not our best day 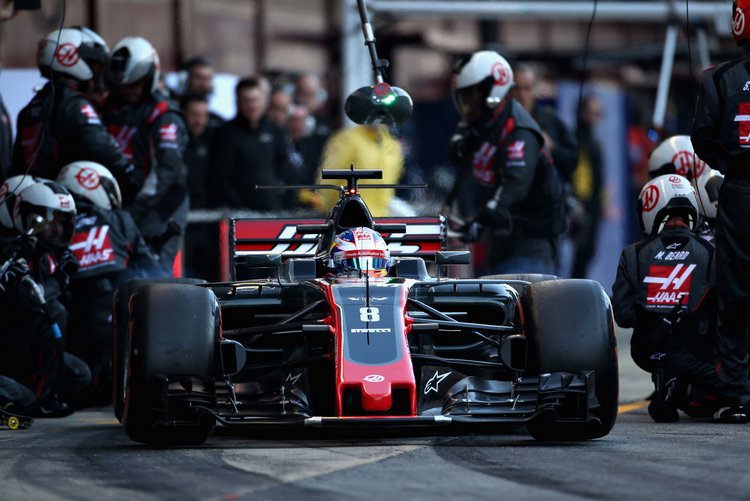 The new regulations have dropped lap times by as much as five seconds compared to when teams last visited Barcelona for the Spanish Grand Prix in May.

Grosjean’s quickest time on the last day of testing was a 1:21.110, which was also his quickest lap of preseason testing. Grosjean set his fast time on his 61st lap while riding on a new set of Pirelli P Zero Purple ultrasoft tires. The mark put Grosjean 10th overall among the 13 drivers participating in Friday’s session.

Getting that quick time meant overcoming some adversity. A mid-morning spin at turn five beached the VF-17 in the gravel trap, resulting in a red-flag stoppage. But with no damage to the car, Grosjean was able to continue on, albeit for only 19 laps before a sensor issue stranded him between turns 9-10. The team bounced back from this misfortune as well, with Grosjean totaling 44 laps before the mandatory lunch break. His best time of the morning was a 1:21.429 earned on his 35th lap with a set of Yellow soft tires.

The afternoon delivered further challenges despite a successful start with two, five-lap stints on Red supersoft tires. A switch to Purple ultrasofts shortly after 4 p.m. local time yielded Grosjean’s best lap. The final 75 minutes of the session were set to mirror Thursday’s program where Magnussen performed a race simulation.

Grosjean was 14 laps into a run on a used set of Yellow soft tires when another red-flag stoppage halted proceedings. Upon Grosjean bringing the VF-17 back to the garage, a water leak was discovered, jettisoning the remaining 30 minutes of on-track running.

Romain Grosjean: “Well, you never feel totally prepared after testing and before you head to Australia. We only have eight days, of which you only get four as a driver and one of those was the wet day I had last week. Yes, the big teams are ready, but for us there are still a few unknowns going to Melbourne. That’s the charm of Formula One. That said, I think we have some good ideas where we can improve the car and, hopefully, the updates we’re going to get in Australia will go our way. I think both myself and Kevin (Magnussen) have identified where we can gain some performance.”

Guenther Steiner: “Definitely not our best day today. We had quite a few issues with the handling of the car. We couldn’t find a good balance. In the afternoon we had a few problems and we stopped early due to a water leak. We couldn’t get it fixed in time. We didn’t finish our race simulation, unfortunately. All in all, the test was, up until today, pretty good. We now go back and see what happened today, analyze data and see what we can do to get ready for Melbourne.”