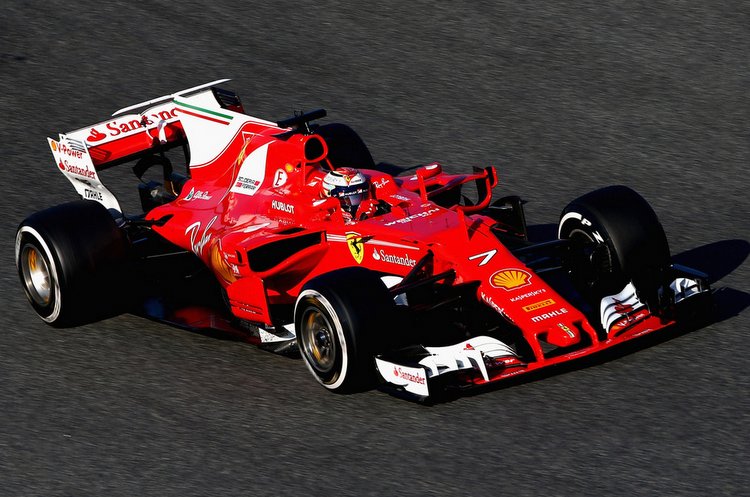 The title should read: Ferrari Testing Champions! Pity the accolade does not mean a thing, so bring on Melbourne!

The eight days of testing in Barcelona went extremely well for the Italian team who kept a low profile with the media, went about their business as their drivers – Sebastian Vettel and Kimi Raikkonen – racked up impressive mileage and both showed impressive speed at the wheel of the mighty SF17H.

Raikkonen was the only driver to dip into the 78 seconds zone, with a best lap of 1:18.634, around at Circuit de Catalunya when he did so on Friday morning, the last day of Formula 1 pre-season testing. Faster than anyone has gone around the Spanish Grand Prix venue in over a decade.

And the flying Finn did his hot lap using a set of Pirelli Super Soft tyres. Might he have been even quicker with a set of Ultras bolted on to his car?

Eight tenths down on the Ferrari was Red Bull driver Max Verstappen, who also did his best lap time on Super Softs but ended up eight tenths adrift with 71 laps on his chart compared to Raikkonen’s 110.

The young Dutchman’s former teammate Carlos Sainz was third quickest in the Toro Rosso, doing more mileage than anyone on the day with 132 laps to his credit. His time was set on Ultras.

Mercedes appeared to keep their powder dry in this final stanza of testing, with Valtteri Bottas fourth fastest on Super Softs in the morning  and Lewis Hamilton fifth fastest on a set of Ultras – the pair finished the day fourth and fifth respectively and 53 laps each on their charts.

Nico Hulkenberg was fastest of the two Renault drivers who did duty on the day, the German drove the morning stint and ended up sixth fastest and teammate Jolyon Palmer eighth. Together they racked up 88 laps.

Splitting the pair on the timing sheets was Force India’s Sergio Perez with 128 laps completed..

Teenager Lance Stroll enjoyed one of his best days on track with Williams, covering 131 laps and ending ninth – his time set on Softs. The memory of his first test misadventures well and truly erased.

Fernando Alonso had another frustrating day with the McLaren-Honda. The MCL32 twice stopping on track with reported electrical problems on the power unit. He managed 43 laps – least of all the drivers who had a full day in the cockpit – and was only quicker than the two Saubers, powered by year old Ferrari engines.

Of course testing is always a bit of a guessing game, but it is quite clear that Ferrari are well prepped for the season opener in Australia, as well as Mercedes who are more than likely to have a chunk of performance in reserve. Or will they?

And how good are Red Bull? And what about their TAG Heuer (aka Renault) power unit?

Those are the questions that will be definitively answered starting in Australia, for what should be a power struggle between the top three teams while an interesting mid-field battle is likely to ensue at the same time.

Meanwhile Ferrari will return to Maranello with a ‘mission accomplished’ feeling, with Mercedes perhaps a tad more concerned than in previous years and Red Bull plotting of course.

Let us know who you think will slug it out for pole and top honours at the Australian Grand Prix?