Haas: We are very happy with the day 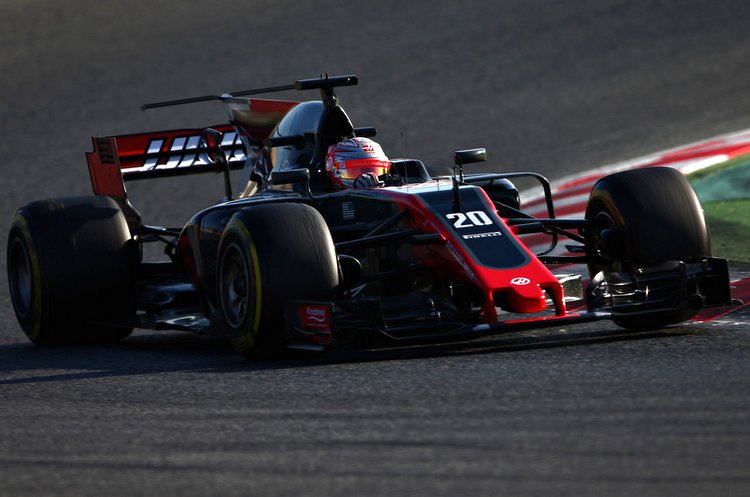 It was the highest single-day lap tally for Haas F1 Team so far this season, with Magnussen besting his own 118-lap mark set Feb. 28 during the first week of testing at the 4.655-kilometer (2.892-mile), 16-turn circuit and equaled by teammate Romain Grosjean March 2.

Grosjean takes over the Haas VF-17 for the final day of testing Friday, but in the penultimate day of on-track running, Magnussen brought his testing total to 369 laps or 1,717.695 kilometers (1,067.326 miles).

Magnussen’s best lap of the day was his best lap of the entire two-week test – a 1:20.504 set on his 62nd lap while utilizing the Pirelli P Zero Purple ultrasoft tire. The time placed Magnussen fifth among the 13 drivers participating in Thursday’s session.

Haas F1 Team’s morning run plan consisted of a series of early reconnaissance laps followed by ongoing setup work. Magnussen ran on the White medium tire for his installation lap and first three timed stints to log 22 laps. A change to the Yellow soft tire brought increased track performance, which was elevated further when Magnussen switched to the Red supersoft tire 30 minutes prior to the mandatory lunch break. His best time of the morning came on supersofts – a 1:20.863 secured on his 39th lap.

Following a brief outing on a set of used softs to begin the afternoon, Magnussen switched to the Purple ultrasofts for two timed stints. With the grippiest tire in Pirelli’s lineup, Magnussen delivered his quickest lap.

The latter part of the day was spent in race simulation, with Magnussen securing a mileage total just short of a race distance. He ran twice on Yellow softs for a combined 35 laps before a 15-lap outing on White mediums that concluded the day’s activities.

Kevin Magnussen: “Another good day. I’m really happy with testing in general. I think we’ve learned a huge amount about the car. We know where we need to work between here and Australia. I’m looking forward to getting back in the car for the race in a couple of weeks.”

Guenther Steiner: “A pretty good day. We got almost a race distance in. We ran just a few laps short, something like 20 laps short of a full distance this afternoon. We got a lot of information. We ran to a quite tough program, but it was good. We are very happy with the day today and how it went, and how to get the best out of the data. There’s just one more day to go and then we’ll get ready for Australia.”